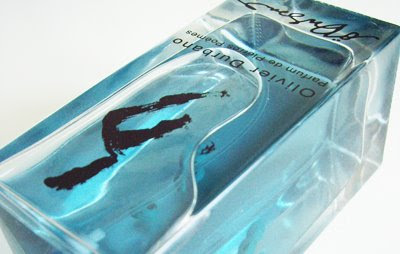 Few fragrances seem to excite me more than Olivier Durbano's Parfum de Pierres Poèmes. As reported earlier, the French jeweller/perfumer has just launched Turquoise - his fifth in a series of seven perfumes inspired by semi-precious gems. Touted to be an "ozonic" style fragrance, I can admit to having had some initial reservations. Ozonic scents à la Comptoir Sud Pacifique's Aqua Motu and Kenzo Pour Homme have not done much for me. Certainly a dull synthesis of ozonic molecules will sell hand over fist on the mainstream market, but these releases are simply not my bag. The ability to find an ozonic scent with true substance had eluded me for years - until today.

Any ideas you might have about oceanic cologne clichés  - you can throw them out the window... and don't be fooled into thinking that Turquoise is the olfactory equivalent of a recreational trip to the oxygen bar. Durbano has masterfully translated a vast spiritual history of the stone into perfume... acknowledging the ancients who revered this gem as "fossilised water" or "fragments of the sky". Turquoise is very much grounded; natural; elemental.
Durbano's perfume creations are referred to as "stone poems", after all.

Turquoise opens with a lustrous accord of elemi which is both lemony and pine-like... it is fleeting, though the resinous quality of this component lingers over green coriander and a very fragrant juniper. Already one's mind begins to conjure images of sprawling forests of fragrant conifers... a vista in the wilds of North America, perhaps.
As the scent evolves, one can begin to determine a faint penetrating sharpness that lends a mineral-like quality - one that I would associate with the intriguing 'turpentine' accord listed in the topnotes. Also much to my delight, I recognise the signature Durbano frankincense note; one common to 4 of the 5 pierre de poèmes. This Somalian oliban is husky and almost orange-like - suggestive of weathered stone and earth.

The heart of the perfume is focused on lotus flower and fucus seaweed... each of these bring an dewy, wet characteristic to the scent. The allusions to water are in striking contrast to the earthy, resinous topnotes, and I find myself thinking of shorelines where sun-heated stones meet cold snaking rivers; the clean mountain air damp with evaporation. It is this clever contrast between the two elements that makes Turquoise such an accomplished and inspired creation.

Myrrh and ambergris provide the foundation for the perfume and again, represent a curious marriage between earthy and marine accords. The innovative balance that has been achieved throughout is where Turquoise's success lies... it represents the stone in its raw form, just as it has been struck from the earth: bottomless oceans of blue juxtaposed against raw and jagged stone.


Turquoise is a genderless eau de parfum, and has above-average persistence. It can be ordered direct from Olivier Durbano's studio in Paris, and will also be rolling out to his regular retail stockists soon.

Thank you so much for this review - I am anxiously awaiting its arrival at Luckyscent so I can sniff.

I must admit, I have to echo what Mike P has just said. But this one is defenitely a must try. I cannot wait, I'm so excited about it !
Once again, it just makes sense ! - The man is a genius ! ;o)

Dimitri you rule. So glad Olivier is getting some love. I absolutely adore his work. ♥

Turquoise is the most brillant use of calone in age!

Hi Dimitri - there's no contact information on your blog, is there a way to email you? My email address is cazaubon at qualcomm dot com if you could drop me a line.