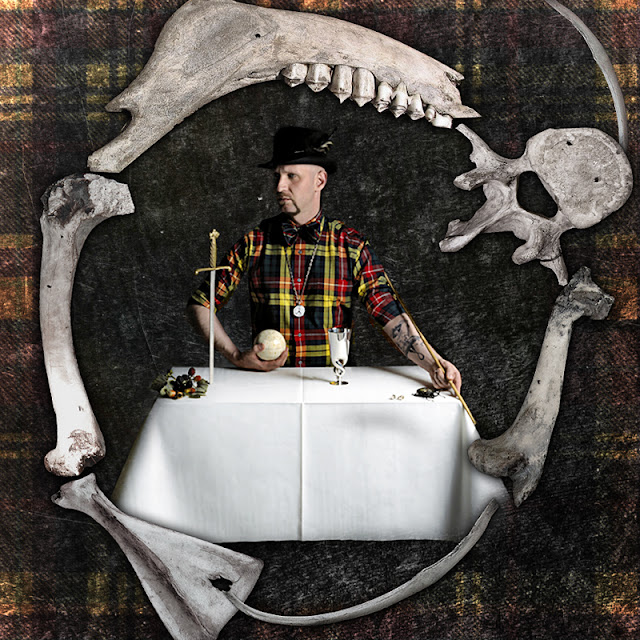 My first acquaintance with Italian perfume alchemists O'Driu and the work of O'Driu protagonist Angelo Orazio Pregoni came via a friend - one whose perfumed predilections, more often than not, run parallel to mine. He had been the fortunate recipient of a sample of Pregoni's latest creation... a personalised and beautifully-packaged kit comprising an amber vial with dropper, an atomiser, and a funnel. The vial was labelled "avantgarde fetish perfume" which immediately intrigued me. I pondered for a moment, wondering whether the perfume stored in the amber bottle was to be considered avant garde, or if the pink nipple dropper and black plastic funnel somehow fulfilled a role in realizing the fetish claim. The supplementary printed material that he'd received with the perfume paraphernalia appealed to me as a packaging designer - it was printed on a flocked cloth-like material that was tactile to the touch. 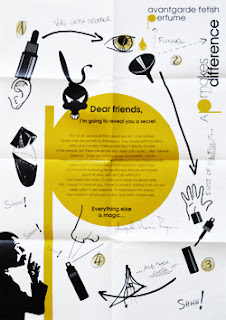 Good, I thought. We all like secrets.
I swatted at the scuttling spider of consciousness that was telling me not to be drawn into the O'Driu marketing prose.

"Some" (secrets) , it read, are "bound with modesty, ethics and morality".

This was starting to sound saucy.
What modesty, ethics and morals could be corrupted and revealed here? I asked myself. My eyes circumnavigated the page, following the black and yellow illustrations in a clockwise direction, hoping they might reveal a clue.
When I returned to the copy, the final line suddenly made it all very clear.

"To experience this brand new creation, simply add a drop (just one!) of pee-pee..."

I punched the term "pee-pee" into Google's translation field, rather hoping the results would yield the name of some rustic Italian liqueur.

Are we *actually* supposed to pee in this?! I baulked. The image of the black plastic funnel and awkward moments in the lavatory made me clench my eyes shut in disdain. I couldn't have been more horrified.
We are supposed to spritz ourselves with urine and wallow like a pig in our own muck?!
The loathing and contempt was growing.
What if I've eaten a lot of asparagus? Or drank a lot of caffeine? Or if Im seriously dehydrated?
I became conscious of my moistureless mouth, and my stomach muscles contracted in disgust.
"This is not a perfume, it's a prank! A marketing stunt! Pregoni is nothing more than a media-starved provocatuer!

Despite my friend's diffusive words and keen fondness of the brand, I was having none of it.

That night in the bathroom, as I emptied my bladder before bed, I found myself still irate at a man I'd never met. Over a scent I'd never smelled. For suggesting I do something I would never contemplate doing. Not ever.
In all the years I'd worked with, studied and written about perfume, I had never felt so confronted. Offended even. What madman would ask a person to piddle in their own cologne?

"It's probably no worse than what you might find in some grey-market knock-offs", my subconscious offered.
I brushed away the thought with a wave of a mental hand.
"Madonna pees on her feet", it retorted, defiantly. "And in some cultures they drink it!"
I pressed the flush button firmly, sending the thought down the S-bend.

I switched off the bathroom light and slid into bed. I kissed my wife goodnight, and let out a long sigh in the dark. A part of me knew that one day soon I'd be wearing my own pee-pee.
"Inevitable", I thought. 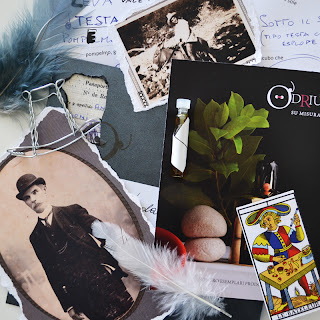 Four weeks on, and a package has landed at my door comprising samples of the entire O'Driu line. Prior to opening it, I had been cautioned that Pregoni's creations were not to be approached in the same way one might anticipate more classical styles of perfumery. I'd already gathered that, thanks to a certain avantgarde fetish perfume, but I had promised to keep an open mind. Right off the bat, I make the observation that Angelo Orazio Pregoni has an unorthodox oeuvre. This is evident in the individual packaging of his samples - each presented in a sealed grey envelope which hold trinkets, feathers, torn photos and hand-written memos. There is an intrinsic feeling of voodoo and alchemy - magick through chemistry - and I begin to get a sense of his olfactory aesthetic long before I pop the lid on his vials.
As I release each sample from it's envelope and admire the accompanying memorabilia, I can't help but feel the resolutely personal nature of their arrangement. That the torn sepia photos bare some special meaning for Pregoni... or that the folded pieces of paper and their passages of text, are words he holds dear.

But then there was still the underlying vexation of the pee-pee. After arranging 16 tiny vials on the desk in front of me, it was the final - very conspicuous, very luminous - vitamin B12-coloured envelope that suddenly became the elephant in the room. The funnel was there, the atomiser, and the amber bottle with the pink-nipple. Somehow though, in the context of my home environment, they didn't look nearly as menacing as I'd imagined. They were just objects wrapped in clear cellophane. They looked clinical. Sterile, even... the absolute antithesis of my disturbing daydream that conjured scenes of rancid piss-spattered floors in rat-infested basements. I was home alone at the time, and might easily have slipped into the bathroom to decant a drop of urine if indeed I possessed the nerve. But the fiddly piss-syphoning ordeal could wait. I was adrenalized by the sixteen stoppered vials already laid out before me. 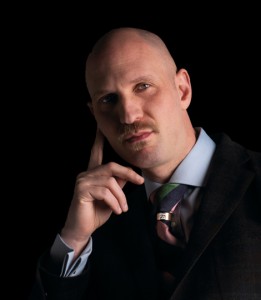 There is no question in my mind that Pregoni is somewhat of a genius. Here I was, prepared to despise the man... the man who asked me to reach into myself and challenge my very fundamental principals... but frankly, his perfumes are too beautiful... too accomplished to entertain - even for a millisecond - the thought that he must be some kind of charlatan. The very notion that he masterminded such a radical response in me, proves he is every bit as deft and calculated as a fairground magician.

Pregoni's body of work runs the gamut between creations that are demanding and baffling, and those that are remarkable and breathtaking. But none are mundane or pedestrian. As I immerse myself in his fragrant repository, testing samples over the period of a week, my respect for the man as a perfumer and indeed an artist, grows stronger with every day. His perfumes have taken me to a precipice, and flung me over... opening a new door in my olfactory journey that I never new was there...

Let me explain how.

The 2012 release Subcilium is one that moves me monumentally... a "Vetyver Experience", the accompanying material reads. And an experience it is... dank forest greens and fragrant conifer needles spread laterally across a rich brown base of earthy roots and resinous tree sap. But suddenly - in what seems to be a kind of olfactory epiphany - this fragrance ceases to be quantifiable through individual accords and ingredients, but rather, through lucid emotions and situations. Here, I've abruptly awoken in a shallow, moonlit grave in the forest, terrified and disoriented. A silhouette in the trees. A green canvas bag. Fear of dying...

There aren't many perfumes I've passed under my nose where groups of accords evoke such vivid recollections - almost past-life regressions - instances where one is forced to surrender completely to the invisible and the implied.

Subcilium is not a singular case. It is one of many O'Driu creations that I find has this incredible graphic impact.
The opening of JMT is an overheated engine. Torn vinyl car seats. Toxic fumes. Suffocation with a dry-cleaning bag. It is all these things and a sumptuous rendering of jasmine, florals and spices.
Pregoni's beautiful Lalfeogrigio, Lalfeorosa and Linfedele 1004 summon similar spectres... their olfactory pyramids recede into the background and their perfume narratives shift to the fore. What magick is at work here? I wonder.

In my eyes, this attribute is what best represents Pregoni's perfume DNA - the olfactory filament that connects his entire body of work. I don't know how he has achieved this, but in doing so he proves he is indeed a master of his craft.

O'Driu perfumes are released in strictly limited runs of between 4 individual units, and just a couple of hundred, and are thus rare and highly covetable objects of desire. I would be hard pressed to suggest a single scent in Pregoni's perfume portfolio that might pose some point of contention. Except, perhaps, for one you're asked to pee into.

It's 8:15am and I'm desperate for the bathroom. My wife is brewing coffee in the kitchen as I collect a handful of small cellophane parcels from my office desk. As I cross the kitchen I turn them in my hands anxiously and the plastic crackles. My wife looks up and sees what I'm carrying. She gives me The Look.
"Oh, you're not going to, are you?" she says with obvious disapproval.

I study the black funnel, atomiser and amber bottle in my hands.

"I haven't decided yet. But I really need to pee".