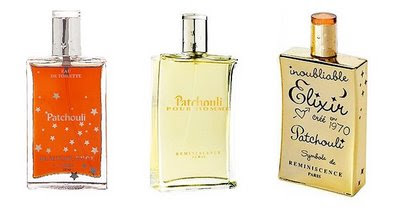 In recent weeks I've been evaluating a stunning organic patchouli oil from Indonesia, assessing it for inclusion in a perfume I am planning to create. I am impressed with its earthy dampness and cool, crisp "white musk" vibe. When I smell this, I feel somehow transported back in time to my childhood... back to days where there were Very Hungry Caterpillars;  where Owls and Pussycats sailed to distant shores in pea-green boats, and wild rumpuses began where the Wild Things were. I feel it only natural though, that this profoundly organic scent triggered my sense of recall and flung me back into the 70's... the use of patchouli was rife in perfumery at the time, and typified the entire era.
Hot on the tails of this evaluation, I hoped to find some new interpretations of patchouli used in perfumery, and so the opportunity arose - via a very kind friend - to sample a scent launched by French jewellery/perfume house Reminiscence. When doors opened to their Antibes store on the Côte d'Azur in 1970, founders Zoe Coste and Nino Amaddeo launched a trio of perfumes to complement their jewellery line - one of which was the aptly named Patchouli. Success followed, and the scent went on to become a triumph and the brand's flagship perfume.
This eau de toilette is still in production to this day, and in 2000 the men's version Patchouli Pour Homme was added to their portfolio. However it was the enchanting gold flacon of the Inoubliable Patchouli Elixir EDP - a 2007 reinterpretation of the original scent for women - that attracted me to this line. I am now in possession of generous samples of all three scents, and have enjoyed wearing each of them. 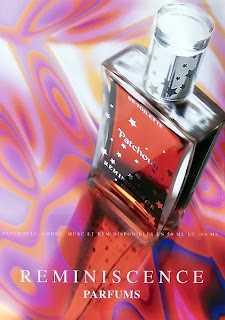 The ladies Patchouli EDT is a dark chocolate-coloured liquid - one that I might mention is likely to stain if applied carelessly to clothes - and the opening accords tend to follow suit... an initial burst of syrupy chocolate features and then fades as crisp woods emerge. There is distinct sandalwood and cedar here until the dark patchouli pushes through and dominates. It brings with it not only a thick, earthy quality that is to be somewhat expected; but also a transparent sense of "coolness". Rich amber ribbons of labdanum flutter through the scent as if caught on the wind, and a creamy tonka/vanilla streak sweetens the mix. But this is the scent of a damp dark forest - one that might feature in a Brothers Grimm fairytale. For an eau de toilette, Patchouli delivers many hours of rich, enjoyable persistence.
The bewitching gold flacon of Patchouli Elixir EDP is indeed a thing to be desired; so too are it's contents, sold the promise of a richer woody-oriental take on the original women's release. But to my nose, the contrast between the two is minimal. Elixir, whilst a paler amber-coloured juice, opens with pretty much the same accords - perhaps a little lighter on the chocolate though. Here, amongst the expected woods, resins and signature patchouli, one might occasionally glimpse a flash of dark vetiver green, but the similarities between the two may be too close to call. Perhaps a distinction can be made in the way Elixir appears to lack the same sweetness of its predecessor; at least in part, anyway. To my nose, the dry-downs are identical, and the longevity/sillage pretty much on par with one another. Despite the beguiling packaging solution, to be frank, I can't really imagine the reason for Elixir's release. Both scents are wonderful, but not individual enough to warrant owning both.
Patchouli Pour Homme, however is a whole other story. With a sharp citrus opening of mandarin and lime that have been imbued with French lavender, the top notes are similar in style to many men's colognes of yesteryear. Alongside the other two releases, initially this scent almost seems a little displaced. However 10 minutes in, the patchouli is more distinguishable and one can draw light parallels amongst the three. The approach to Patchouli Pour Homme appears to have been to garner mass appeal... the woody accords of Virginia cedar recede and sparkling geranium moves forward. Here, the patchouli almost seems to take a subordinate role behind all the other accords. There is nothing dark or brooding about this scent - it is a fresh woody fragrance that I'm not actually convinced hits the mark. What I do enjoy, however, is the nice resinous turn upon the dry-down in which benzoin, labdanum and shimmering white musks bring a dying puff of opulence - though perhaps a day late and a nickel shy.
Whilst I may bemoan missing out on the wonderful Elixir flacon (for weeks, possibly), I would personally invest in the women's EDT version and enjoy the savings it has to offer - it is dirty and manly enough to pull off by the gents, and opulent and gourmand enough to please the ladies. Though none of them quite capture the essence of true organic patchouli oil, I feel on the whole they have much to offer the patch enthusiast. 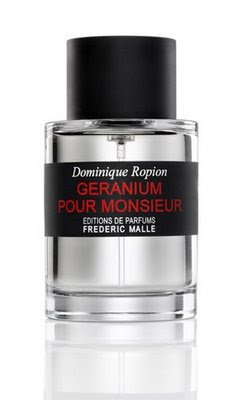 Those who know me, understand I am a fan of geranium. Not only is it the common denominator in the vast majority of my favourite scents, but geraniums have always been around me - potted pelargoniums decorated our balcony when I was a child, and I have come to associate their aroma with good times.  Some might thus understand my excitement when I learned of the imminent Frederic Malle release Geranium Pour Monsieur: the new creation by accomplished nose Dominique Ropion.
Slotted for release in May 2009, there are still several weeks before I can sample this scent - it will be a gruelling wait. In the meantime however, here are details on the olfactory pyramid, and Frederic Malle's own reflections on the creation of Geranium Pour Monsieur.
Mint Absolute (Molecular distillation)
Pepper Mint Oil
Geranium (Chinese) Oil
Rhodinol
Anethol, Floralozone
Cinnamon CO2
Clove Oil
White Musk Cocktail
Ambroxan, Sandalwood
Incense Resinoïd
Styrax Benzoin from Siam
"My main inspiration when working on my Anterenea soap was the scent of the old-fashioned luxury soaps of my childhood. It is while creating this formula that I rediscovered the clean sophistication of geranium and promised to make this oft-forgotten raw material the leading part in a future perfume.
After talking through my idea with perfumer Dominique Ropion, we realized that using geranium essence as the main component of a masculine fragrance was the ideal way to create a clean, brisk alternative to the all-too mundane fern-type smells that dominate men’s perfumery. Furthermore, by mixing geranium with aniseed and a cocktail of new, very refined musks, we generated the long-lasting freshness that most men desire, but in a far more sophisticated way.
The main components of this new breed of men’s perfume quickly emerged: geranium from China, rhodinol (a fresh-smelling raw material extracted from natural Chinese geranium), mint, aniseed, spices such as clove and cinnamon, sandalwood, and a large dose of white musks. The formula also contains notes that, although natural, represent the latest in technology: its cinnamon, for example, was extracted with CO2, and its mint is a specific molecularly distilled mint absolute. This new breed of raw materials brings together the beauty of nature and the precision of the digital era.
The above notes give the fragrance a feeling of purity and freshness, so to increase the depth and sophistication of the new composition, Dominique added deeper, more exotic notes like incense resinoïd and styrax benzoin from Siam.
I hope that you will agree that “Geranium pour Monsieur” is a new alternative for men seeking ultra-chic freshness." 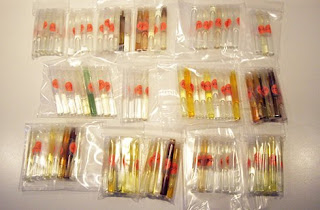 As a student of the Nature's Nexus Academy of Perfuming Arts, I am learning more and more about perfumery as an accomplished craft than perhaps I'd first imagined. Studying the complexities of the perfuming process from inception to completion has really left me feeling somewhat overwhelmed, but also with a greater appreciation of the art. My individual evaluations of oils in my perfumer's palette alone has enabled me to recognise and appreciate individual accords and the olfactory qualities that can be attributed to each of them. With around 100 diluted absolutes to analyze, I have my work cut out for me before I even begin to attempt to mix a scent of my own... the theory and safety information alone have kept my nose buried in books, before even a solitary sniff of the air could be had.

I've decided to post a brief evaluation of certain individual essences from time to time with you, the reader. Of course they are my own observations, but in doing so, I hope to be able to impart just a little more information about the properties of an oil, and how I feel it can be well applied and interpreted in perfumery. I will begin with scents that interest, challenge or move me in some way, but invite you to request individual essences you might like to learn of, (if indeed it is in my palette). Just leave a comment if you'd like me to examine a particular accord. 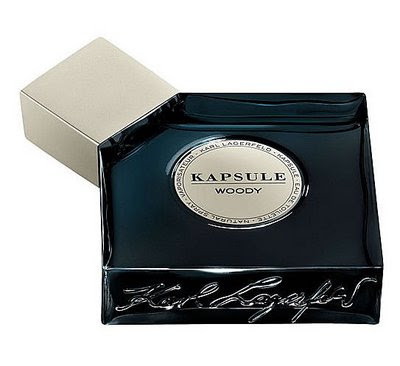 If the truth be known, king of French fashion chic Karl Lagerfeld has always unsettled me with his appearance. There's something about that shock of white ponytailed hair, his caramel coloured perma-tan, and fingerless leather gloves that seemed somehow incongruous with a man in his 70's... not to speak of his mystifying black shades à la Michael Jackson - but despite the veneer, the man is a fashion genius. In his sensational career, Lagerfeld has worked with the greats: Chanel, Balmain, Cholé and Patou, but his present fame has been achieved with his freelance career and numerous couture and ready-to-wear collections that carry his own name. 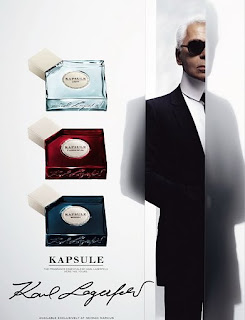 In 2008, Lagerfeld teamed up with several accomplished noses to create a new trio of unisex perfumes in his contemporary Kapsule range: Light, Floriental and Woody. A series of scents designed to carry you from daybreak to well after dark; I was particularly charmed by the intriguing Olivier Cresp creation: Woody... a fragrance that bestrides the line between genders and summons one to explore further. Woody is built around notes of dry cedar and dark mosses - each of which lend an earthy masculine charm, but tendrils of climbing green ivy and bushels of velvety violets disclose a softer, tender heart. When I close my eyes and inhale, I see with my mind's eye; dark cypress-green hues and rich purples. There is a semi-gourmand aspect to Woody that I attribute to a lush and narcotising plum accord - one that is not too saccharine, but lends an opulent nectar-like quality to the formulation.
As it evaporates from the skin over an impressive 8 or 9 hours, Woody shifts recurrently. The fragrance unfurls unhurriedly, and at times, reminds me of Armani Privé's Cuir Amethyste, or the wonderful dry black tea-like accords distinguishable in Burberry's London for men.
I am excited with this release as not only does it bring something new to the mainstream by way of a unisex woody scent; but also because it is unpretentious and surprising.
One to sample generously.
3 comments: