Whilst the idea of using authentic animal products in perfumery is enough to enrage animal rights activists the world over, there is comfort in knowing that the much sought-after Ambergris (grey amber) is one of a few substances that can be sourced without inflicting any harm to the creature itself.  Au contrare...  this waxy grey/white material is uncommonly ejected from the intestinal tracts of sperm whales, bringing much relief to the beast in the process.

The trouble is, that ambergris is difficult to come by. Occasionally, some very fortunate beachcombers stumble upon lumps of varying sizes in the dunes, and others have scooped the floating material from the open seas with nets - but whatever the method of collection, ambergris will be sure to net you a tidy profit. In recent years, a 15kg lump that was found on a beach in South Australia, has been valued at a whopping $300,000. Its rarity and desirability for use as a basenote and fixative in perfume sees suppliers shell out top-dollar to secure this rare commodity. Its deeply earthy, semi-sweet balsamic aroma intensifies fragrances, and increases longevity. 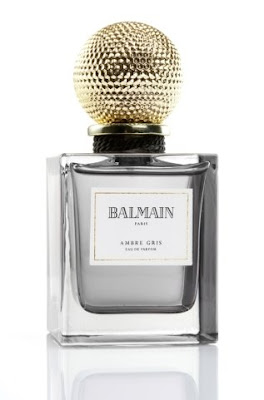 For decades perfumers have been inspired by this rare and precious component, and many have put their own twist on the ambergris theme. One which I am particularly fond of, is the 2008 Balmain release, aptly named Ambre Gris. Enchantingly presented in a weighty grey glass flacon and twinkling gold crown, Ambre Gris is an opulent elixir that displays characteristics of both a gourmand perfume, and one with a mild animalic edge.

It opens with a rousing floral accord that shifts quickly into a candied fruit note... but thankfully one which is not too saccharine in nature. A permeating honeyed warmth seeps through the topnotes, and is followed by a husky iris-like dryness. It is at this point where the scent lingers in an unusual narcotising state of limbo where the balsamic ambergris materialises as if from the murky depths, and is suspended like a shining lure at the end of a fisherman's hook. It is sensuous and smouldering. Wonderful curls of resinous benzoin lend a deep caramel warmth, and myrrh; a soft soapiness to the scent. The edible quality is thick and luxurious like ribbons of golden syrup, but the ambergris at the heart denotes something more organic. Its tranquilizing voice sings through the layers of this perfume like a Siren, beckoning, coercing, ensnaring.

Many hours later, Ambre Gris is still evolving. There are fleeting moments of synthetic rubber such as those found in Bvlgari Black,  leather much like that present in Acqua di Parma's Colonia Assoluta, and vanilla/musks akin to those in Gaultier2. It is a perfume that has been made for the mainstream market, yet it has all the olfactory indicators that could liken it to many niche releases today. It can be celebrated for its above-average sillage and titanic persistence (8+ hours on me, after 2 discreet spritzes), but more so for its charming take on this prized treasure from the sea.

Thanks go to Liz, for sending me with this bottle. A very kind gesture, and much treasured gift. 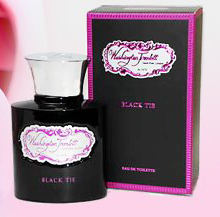 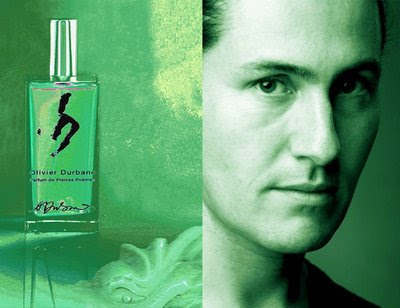 In ancient Chinese Dynasties, Jade was revered as the imperial gem... favoured by the high-ranking members of the imperial family as an ornamental stone. Varieties of the stone can be found in hues from white, through pink to black, but the highly prized emerald green jade commonly appears in history, used in elaborate ceremonial pieces, and hand-fashioned by skilled artisans into objets d'art.

On a school trip to China in the late 80's, I returned home with several jade souvenirs... mostly trinkets really, but it is the very nature of the stone that seems to embody the country's vast history. In a bygone era, when nomads travelled the Silk Road, it was considered more valuable than gold. It is little wonder then, that jeweller/perfumer Olivier Durbano has chosen this esteemed cabochon for inclusion in his seven "stone poems".

This being said, when Jade is first applied, I do not immediately garner a sense of noble opulence as perhaps I had expected. Instead, I get a strong sense of the China that might have existed in the early 1900's - when her glory days were over, and she was a country controlled by many European nations. After several wars, and with control over most of her lucrative sea-ports lost to the Europeans, this invited foreign trade and residence. China was influenced by external powers, and the wishes of the Chinese themselves often ignored. This cohabitation meant a swing in Chinese culture was at hand, much to the resentment of the Chinese. So, how is this translated into perfume? I hear you ask... well, Jade is a clever marriage between European convention and Far Eastern tradition.

As one might well imagine, judging the vivid green colour of the juice; opening notes are initially rather medicinal... a sharp stab of lush wet mint, followed by the biting aroma of bitter green tea leaves. Whilst these accords share a starring role and have remarkable tenacity, one can also distinguish a scattering of star anise and a curl of aromatic cassia. The experience is rather like a visit to a traditional Chinese herbalist whose walls are lined with antique wooden apothecary drawers; the contents of which are collected and bundled together in rice-paper packages, and carefully tied with string. One can also identify some delicate florals and dusty iris germinating at the heart, though these are as fine as Chinese silk and transparent as hand-made paper lanterns. They merely cast light on the understated vetiver/patchouli base that lies at the floor of the perfume, and whose accords soar and fall sharply like rugged Chinese mountains.

People familiar with Durbano's previous offerings might wonder if he has captured the spirit of jade (the stone) with the same measure of excellence as he has with his other stone poems. His approach to this scent marks a shift in style: for starters, the resinous frankincense/incense accords which were at the heart of all 3 previous perfumes (ones that I felt lend the earthy/mineralic qualities to his work); are now absent. This being said, I don't feel this diminishes his interpretation of jade. After all, the Chinese use jade less in its raw mineral form, and more as a polished and finished piece. If one could experience the taste of a smooth green jade cabochon, it would taste just like this perfume smells. There are nuances of the Far East, and shades of traditional European perfumery that make Jade an enchanting scent with a wonderful vintage twist.

Jade is currently available at luckyscent.com, and will be soon shipping from other exclusive Durbano stockists.