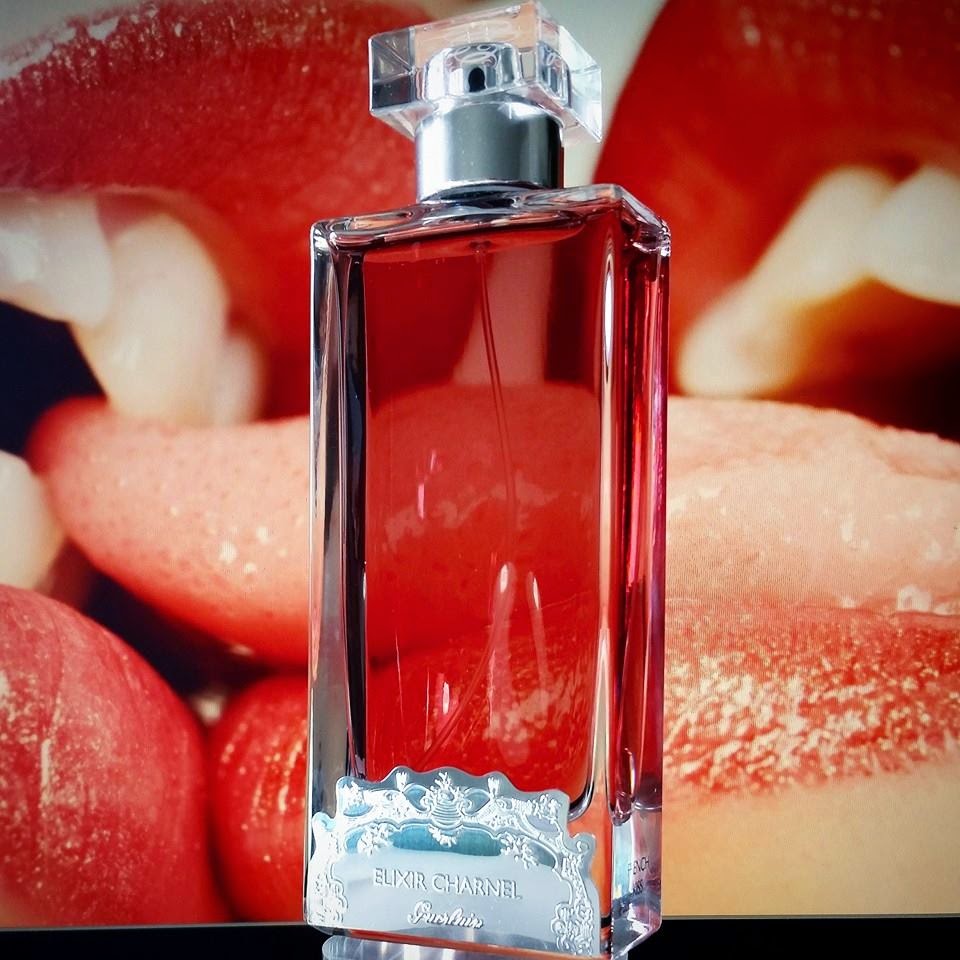 New to the Guerlain "Les Elixirs Charnels" lineup in 2014 is the super-sexy French Kiss. Quintessentially French and quintessentially Guerlain, 'French Kiss' is a mouth-watering délice created by the hand of Thierry Wasser that typifies the series' fondness for confection-like sweetness.

French Kiss opens with an ambosial flight... jammy, pulpy raspberries meet the nose beneath an initial sparkle of citrus. The berries are deep red in hue, and their olfactory profile borders on that of sour cherry. An enchanting blend of violet and orris lend a faint lipstick vibe (no surprise really, given the scent was created to commemorate the 20th Anniversary of Guerlain's Kiss Kiss lipstick line). These accords also lend a sense of powdery dryness, which calls to mind a baked meringue dusted with confectioner's sugar... fluffy and chewy on the inside, and chalky and brittle on the outside. A caramel-brown ribbon of heliotrope and vanilla add a creamy sweetness to the trail - the effect something like a ganache or melted French vanilla ice-cream.

A Fruity Floral with strong gourmand characteristics, French Kiss veers away from the pedestrian and feels very much the sequential successor in the Elixirs Charnels series. On paper, it may appear to have certain nuances plucked from the mega-successful commercial release La Petite Robe Noire, but the quality here speaks for itself. And lets face it, who here doesn't find glacé desserts and candied trappings kind of sexy? 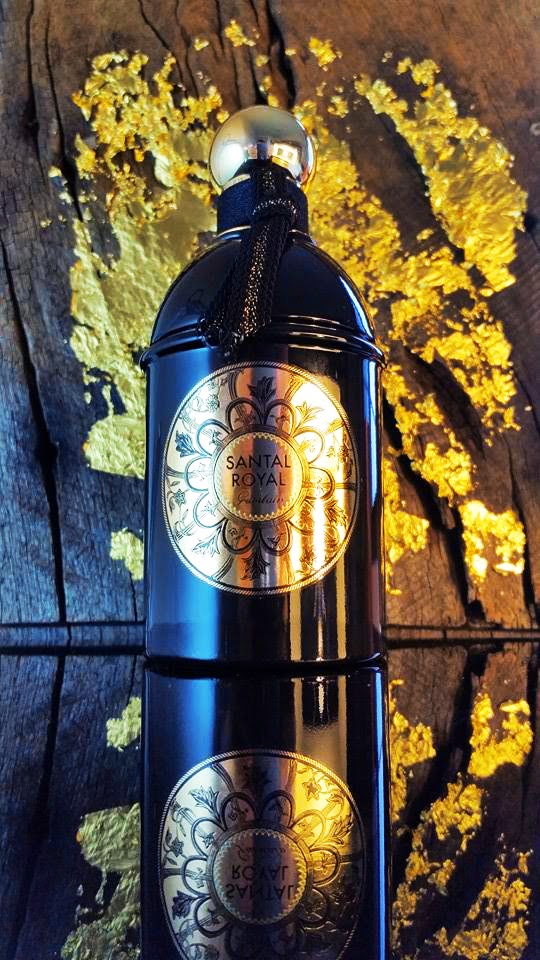 This year Guerlain introduce a new scent intended for the Middle Eastern market; Santal Royal. With exclusivity limited to the new Salon de Parfums at Harrods in London (for the time being), Santal Royal is an ode to one of perfumery's highly regarded ingredients; sandalwood.

Santal Royal surprises with its opening which features (quite obviously) sandalwood, but if in these fleeting opening moments one can avoid being seduced by the darker, woodier aspects of the fragrance, the flight has something of a signature Guerlain treatment: wafts of bergamot and lavender tippy-toe over an aromatic slant of geranium and coriander. These nuances keep the scent uplifting and bright before - mere moments later -  richer, more complex notes emerge. Cinnamon and clove-like spices give rise to a thicker core of florals... rose, ylang-ylang and jasmine seem tickle my receptors. They are imbued with an off-the-rack oud accord (which, if I'm to be honest, I've smelled before in Armani's Cuir Noir and Puredistance Black), but it's earthiness does work well against the precious santal. A biting tartness is also present, suggestive of tanned leather, but it only makes its presence felt from time to time. A warmer foundation of amber, tonka and musks steer the scent back to a more familiar 'Guerlain' stable, before the fragrance vanishes from skin altogether a generous 8 -10 hours later.

I wonder if Santal Royal is just a one-off, or if it might lend itself to an Aqua Allegoria-type series for the middle east? If indeed the latter, I dearly look forward to what might come next.
1 comment: 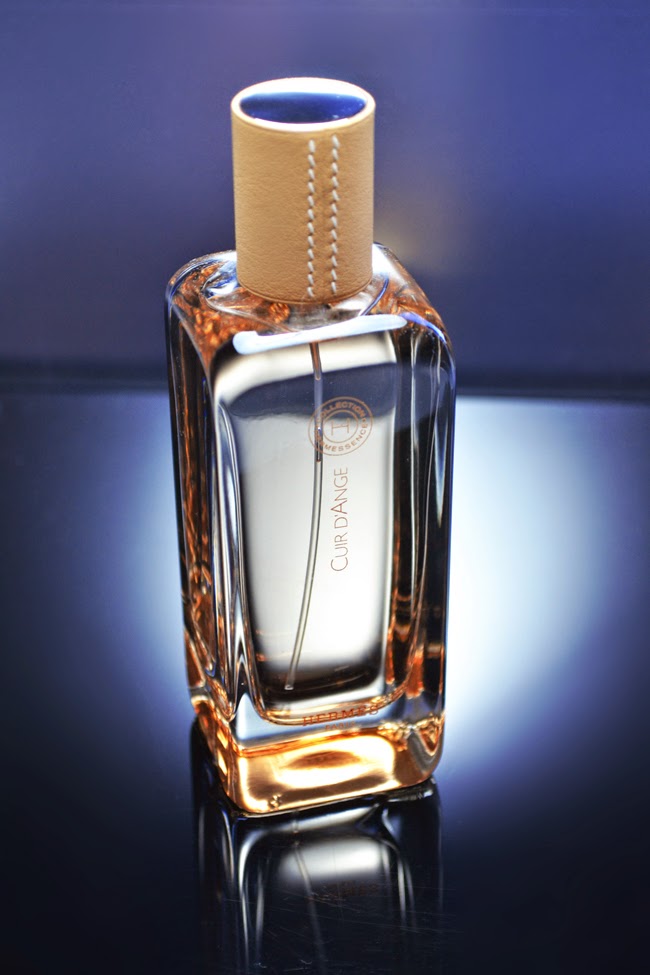 This October, we are honoured to receive more prose from the perfumed pen of Hermès nose Jean-Claude Ellena, as the house gives flight to Cuir d'Ange, the twelfth creation in its exclusive Hermessence line.

In 2014, Jean-Claude has found his muse between the pages of a book - one that has touched his life profoundly. Twentieth century French writer Jean Giono refers to 'angel leather' in a passage from the book "Jean le Bleu", and it was from there that Ellena's inspiration took seed.

In keeping with strong House traditions, Cuir d'Ange is devoutly Hermès through and through... it tips its hat to the historic Hermès scents of the 1950's, whilst in the same breath feels strikingly contemporary. If one were asked to trace its ancestry, one could not look past the cardamom-laiden citrus flight of Eau d'Hermès, and the delectable bittersweet leathery qualities of Doblis. Moving forward along the timeline, the floral/leather treatment of Kelly Caleche springs to mind, though Cuir d'Ange feels a little more mature and sophisticated. I wonder too, if Ellena has borrowed from his recent creation Épice Marine, perhaps with a rearrangement of it's salty ozonic accords included here to suggest vast and infinite space overhead. After all, is that not where angels reside?

Cuir d'Ange darts between the ethereal and the earthbound. It's enchanting florals - heliotrope, iris, violet and daffodil - steal glances through a more grounded leather/musky veil. The sandy pink calfskin lid and nude blush hue of the flacon communicate a certain tenderness... the napped suede caress of an angel, maybe.

Two words is all it took for Ellena to make tangible a scent that is genderless and appealing, and observes the traditions of the House. As an author of perfume, his words are his smells, and here he has written a poem of unearthly beauty and the sublime.

Cuir d'Ange is available in Australia at Hermes.com, and internationally online and in Hermès boutiques in 15ml, 100ml and 200ml sizes. 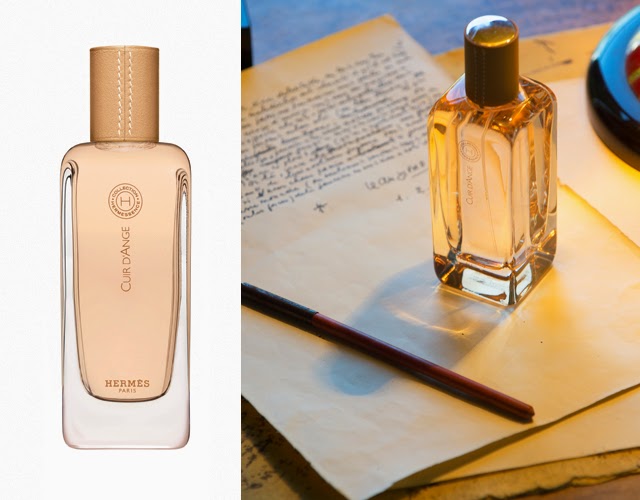