As many have said before me, Terre d'Hermés is a fragrance triumph. Voted 'Best Fragrance of the Year' by FiFi in 2007 in the 'Men's Luxe' category, my love affair with this scent began whilst visiting Greece that same summer. Given the sweltering heat at the time, I was enamoured with the way it blossomed on my skin.

Its opening accords of fresh green/orange citruses are much akin to those found in Eau d'Orange Verte - another of my Hermés faves. However, it quickly shifts into an unusual chocolatey/jaffa note, before some rich earthy and elemental accords come to the fore.


It is the scent of a long-forgotten orange orchard that is overgrown and untameable... one that can only be reached by cutting through thick, tangled undergrowth that has flourished over several centuries through abandon and neglect. There is almost a sense of an "electrical storm" hanging overhead... a threatening heaviness, accompanied by the sharp spike of ozone in the air that declares when clouds, swollen with precipitation, are set to burst. One can detect the aroma of dusty, turned earth as it is speckled with fat raindrops... soil that is littered with over-ripe, mouldering oranges that have fallen from the green canopy above.
Terre d'Hermes is an elaborate synthesis of accords, but one that ultimately captures just a brief moment in time... a snapshot, which clearly records every detail and impression in vivid colour. It is basic, welcoming and familiar.

Jean Claude Ellena once again has approached its construction with great sensitivity, and the result speaks for itself.  Its projection is perhaps not the best, however it is worn close to the skin, and in doing so, allows the wearer this wonderful personal luxury.

Last weekend I was thrilled to learn that I was successful in securing one of only 10 very limited places offered to study with the NNAPA.
Nature's Nexus Academy of Perfuming Arts was founded to provide education to aspiring perfumers, and the course will be focusing purely on the use of natural materials. They offer a year long course of study in natural perfumery that will enable students to create their own perfumes and perfumed products. I am extremely enthusiastic and excited to participate in this program, and hope at some point down the track, to be able to present to you, some of my very own perfume innovations.
3 comments: 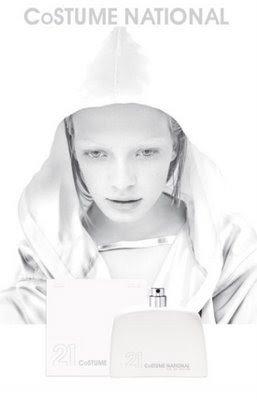 In 2007, Costume National celebrated 21 years in the biz, and to celebrate the milestone, they created 21 - a new, bewitching eau de parfum created for both men and women. I have been waiting for many months to try this, and was thrilled when a sample recently appeared in my mailbox.
CN fragrances to me, are like a sheep in wolf's clothing. Their minimalistic shiny flacons and stark, monochromatic advertising campaigns suggest that the scents themselves should follow suit: clean, linear, unembellished. But if the truth be known, 21 is yet another perfume in the CN portfolio that challenges this very notion. It contains 21 components that run the gamut from cold milk and fragrant saffron, through royal jelly and creamy tonka bean, to spicy cumin and smokey oud. Though there appears to be a striking diversity in its individual components, a rare sense of balance and harmony has been masterfully achieved. 21 intoxicates the senses and captures the imagination.


This scent opens with a crisp scattering of orange blossoms that are cushioned by a comforting lactic milk accord skimming just beneath the surface. It transitions rapidly into something warm and really rather profound... saffron, pepper, cashmere wood, musks and amber all lend their radiant heat to the mix. Curling wisps of labdanum and olibanum and oud contribute a balsamic richness... the effect here akin to something of a smoky tobacco accord. I can also detect dark earthy pits of patchouli (similar to Tom Ford's interpretation in White Patchouli) and bushels of fragrant vetiver. But there is also an ever-present softness - vanilla, sandalwood and smooth tonka bean that allow this scent to last for hours and hours on the skin. This being said, 21 is not a "sweet" scent by any stretch of the imagination; Ennio Capasa's perfume innovation is a clever marriage between white purity and veiled complexity. A fragrance that again epitomises the Costume National ideal of modern sophistication melding with timeless elegance.

I will definitely be adding 21 to my Christmas list this year, and dropping all the right hints in all the right places. Roll on December...! 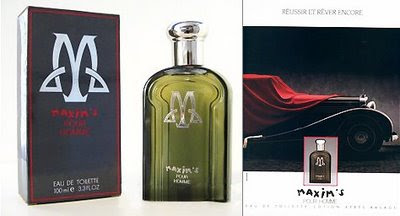 In 1981, when designer Pierre Cardin purchased the famous Maxim's restaurant on the Rue Royale in Paris, he was already dreaming of opening several more across the planet - each one with cuisine every bit as lavish as the Art Nouveau ornamentation and furniture within. With branches now in New York, London and Beijing, the Maxim's empire has become a string of culinary institutions, a hotel and a museum.
In 1988, Cardin teamed up with bottle designer Pierre Dinard, and created the wonderful Maxim's Pour Homme - a lush floral fougere that embraced the Art Nouveau design ethic of highly stylised flowing organic lines and forms. The scent itself can, in hindsight, be characterised as being very 80's in style... full-bodied and excessive, much like other colognes of its time. But this fragrance, now regrettably discontinued, can still hold its own alongside other 80's greats such as Chanel's Antaeus and YSL's Kouros, when pitted against many modern mainstream releases.
A exuberant opening of wet lavender and lush fruits blossom on the skin over a mildly indolic heart of jasmine, sharp muguet and peppery carnation. There is also an unmistakable core of mossy cedarwood and sandalwood that act as the framework for this scent. The basenotes are characterised by dark patchouli and musk accords that dip and dive between the ornate leathery pillars that hold the roof of this composition aloft. On paper, the individual elements might appear to be an erratic assortment, but after 20 or 30 minutes on the skin, there is a wonderful synthesis of these accords that work phenomenally well together. If I were to find fault in it, perhaps its only short-coming is in its longevity, which is approximately 4 hours on my skin.
I am in raptures over Maxim's composition, but have to keep reminding myself that this scent is no longer in production. Fortunately, for the time being at least, I have secured a source where I can buy it extraordinarily cheap (ie: less than $3 for 120mls), so phenomenal deals on this fragrance can still be found. But I am left wondering what will happen when the reserves have all but disappeared, and this scent is lost to the halls of time...
... I can only hope that it too is resurrected on some distant day, and celebrated in the same way the Art Nouveau themes have been, in Cardin's opulent eateries.
3 comments: 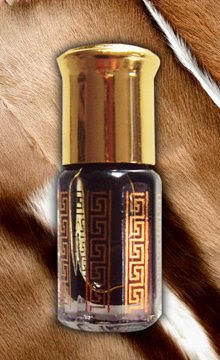 After my recent study of a number of Middle Eastern oils, I feel I have chanced upon a phenomenal find: the treacle-coloured elixir named Musk Ghazelle -reportedly produced by the manufacturer Ajmal (though I do not see this scent listed in their portfolio of perfumes).

From the very first moment Musk Ghazelle reached my nose, it flicked a switch within. It was as if a child leaning between the bars of a sleeping lion's den, prodding the slumbering beast repeatedly with a stick; finally roused the raging carnivore within me. Something had triggered a natural behavioural response in me that effected my human physiology... evoking a desire to hunt, to consume and to propagate.
Simply put, this potent blend wreaks havoc with my pheromones. It awakens a primordial instinct that has been buried deep in the recesses of  the human psyche for millennia... one of a pack-hunting, flesh-eating predatory race that copulate shamelessly on thick animal hides in dark caves lit with flaming torches.

Musk Ghazelle opens with a fine ribbon of sun-ripened fruits that give the impression of having laid around a little too long... perhaps already undergoing the early stages of fermentation into a sugary alcohol. Somewhere beneath, there lies a fleecy musk accord that is not sharp and acrid as with most musks; but organic and somehow fatty. This musk swells and grows as the oil warms on the skin... one can quite clearly imagine their face pressed into the warm, powdery hide of an animal, conscious of the oils in the hair and dried sweat on the beasts skin. It is a very sexy, vulnerable scent... and every bit as appealing to the hungry predator as the limping impala that has strayed away from the main herd.

This is a spirited potion that reaches far into the recesses of the human subconscious. Whilst many mainstream perfumers falsely claim to create scents that render you irresistible to those around you; Musk Ghazelle is the first perfume I've encountered that appears to do so on a biological and psychological level. A few drops of this potent oil shared between couples, is bound to make the earth move!

Musk Ghazelle is sold by the quarter tola (3ml) for approximately $35, through strictly limited distribution.