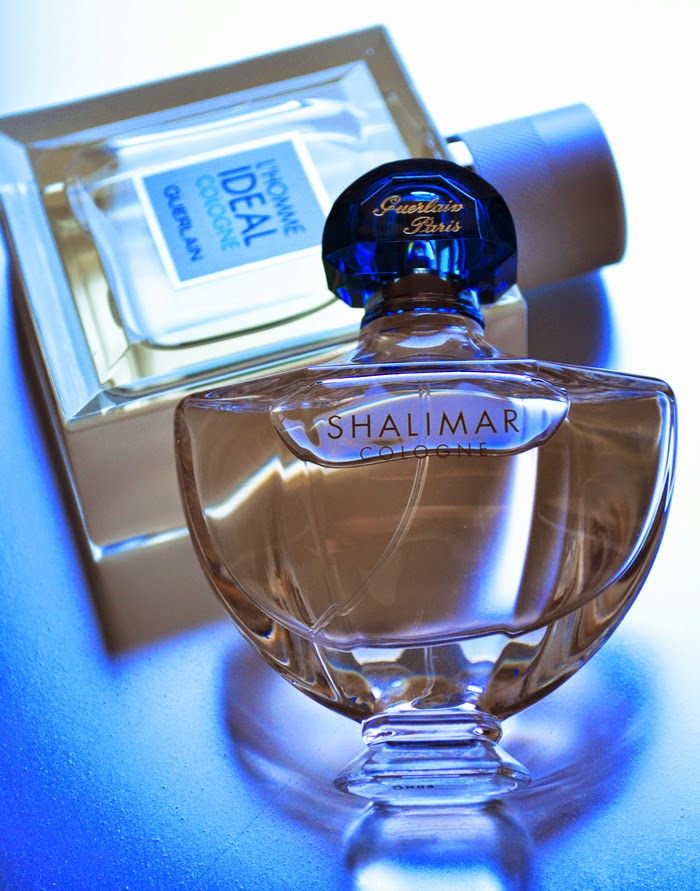 With the onset of the Northern Spring, Guerlain have released a duo of new flankers based around two mainstays in their vast perfume portfolio: L'Homme Ideal Cologne and Shalimar Cologne.
Traditionally, with cologne referring to the lightest of perfume applications, rather peculiarly, both are in fact eaux de toilettes... they represent Thierry Wasser's interpretation of classic colognes but are presented in a more generous concentration.

In 100 words or less (no mean feat for a rather indulgent and wordy Sorcerer), here is my personal take on them. 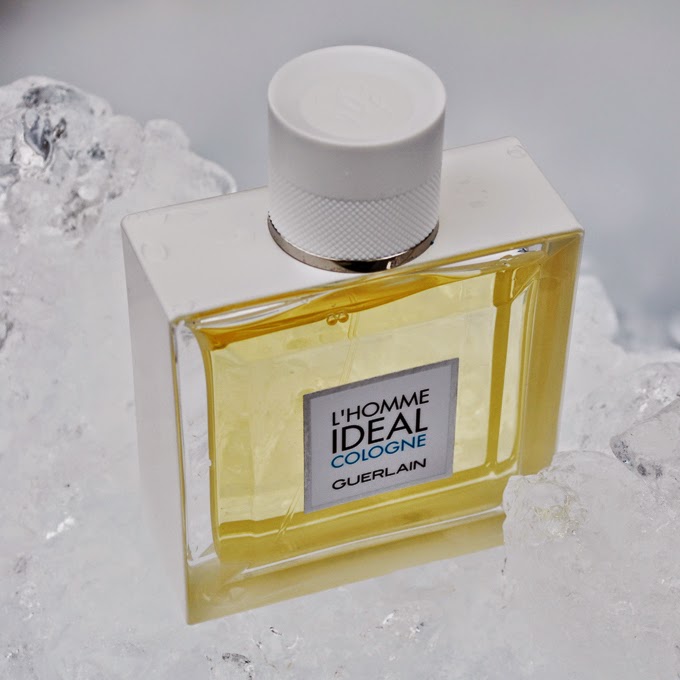 A fresh, zesty twist on 2014's triumph L'Homme Ideal, the new Cologne version abandons the glorious praline and sweet-tobacco facets of its older sibling and instead infuses the composition with a good dose of grapefruit... its bittersweet citrus tang steers it away from the comforting ombré of sensual autumnal warmth and instead, sets a course for crisp and sheer summer briskness.
From the bottle, the bright pamplemousse flight and green vetiver notes produce a fleeting cypressy vibe, which lends a sense of Mediterranean sun. The signature heart of almond and neroli shares a welcome, familiar footprint with its wonderful older brother. 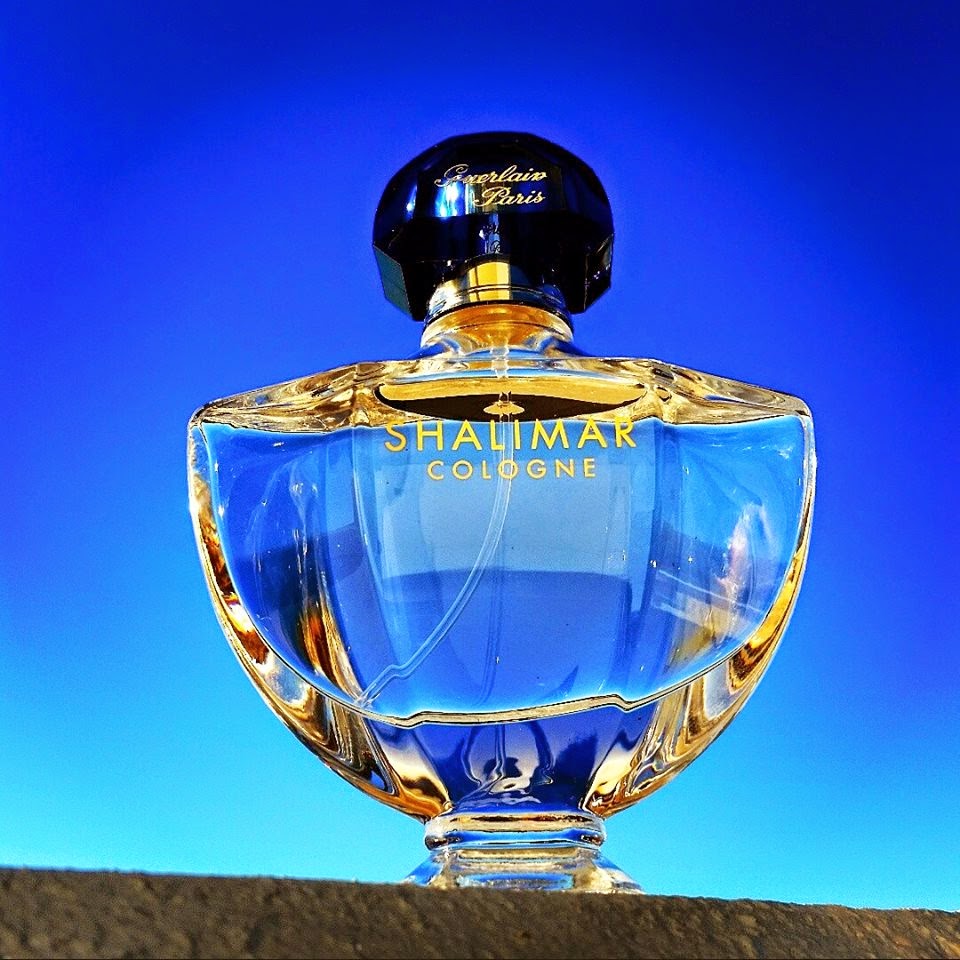 Lovers of the highly-venerated (long discontinued) Shalimar flanker "Eau Légere" rejoice! This newest take on the world's first Oriental perfume, Shalimar is an exceptional rendering which runs somewhat parallel to Mathilde Laurent's limited edition creation of 2003. Thierry Wasser has infused Shalimar Cologne with an effervescent burst of lemon/bergamot and grapefruit and a scattering of rose, jasmine and freesia. A sensual trail of clean musk, iris and vanilla make for a tender caress on skin which - despite it's fresh and modern charms - remains distinctly Shalimar.
An updated and gratifying release which doesn't claim to steal its famous Grandmother's thunder.

L'Homme Ideal Cologne and Shalimar Cologne are both currently available on the Guerlain website and in select travel retail outlets, and will be rolling out to other Guerlain doors imminently.
No comments:


All too often we - as perfumisti - bemoan perfume reformulations, citing any measure of tweaking to a highly-regarded scent as a ghastly abomination. And yes, occasionally it is with good reason... indeed, newly imposed restrictions on certain natural raw materials have impacted upon some of the classic perfume pillars of the past. In this day and age, however, we are seeing something of an upswing in the way synthetic materials are being produced... ones that today, are rarely distinguishable from the organic source from which it's smelly molecules were appended. If I'm frank though, I've about had enough of whining 'aficionados' instantly writing off beautifully-executed reformulations and reissues of time-honoured perfumes without getting to know them better first. It must be incredibly challenging for an established House that has endured the ebb and flow of wartime, fickle trend and financial collapse to gather some traction in a fussy modern market when re-introducing perfumes from their illustrious past. Sometimes - just sometimes - I think that the merits of a house should be solely measured by what sits on the shelves today... not those that graced our dresser tops during the Great Depression. We no longer live in the 1940s; no longer have the same tastes; no longer have the same cultural cognisance, and are now - by comparison - a chiefly non-smoking society... why then, should we aspire to reach for perfume relics of the past?
Le Galion is one Maison de Parfumerie that I feel strongly ought to be approached with an open mind, a welcome nose, and perhaps most importantly, a keenly modern perspective.

Founded in Paris in 1930, 'Le Galion' was named after a sea-faring Galleon vessel and evoked thoughts of adventure and escape to far-flung isles. With master perfumer Paul Vacher at its helm, Le Galion set sail for success in the 1930s to the 1950s with the launch of a string of iconic perfumes such as Sortilege, Snob and Whip. These scents - much like many of its French contemporaries - succeeded in penetrating the global psyche and were known the world over. Vacher - an esteemed perfumer, has left his fingerprint on not only the Le Galion collection, but also authored Dior's legendary 'Miss Dior' and her younger sibling 'Diorling'. In fact, Vacher's consummate reach into the global consciousness saw Le Galion sold in 97 countries by the mid 1960's. So why - we must ask - is the name Le Galion seldom known or heard of today? The answer is simple... after Vacher's unexpected passing in the 1970s, the sale of the company to an American conglomerate saw the new management run Le Galion aground. By 1980, the House had all but vanished, leaving barely a trace of its venerated past in its wake.
Fortunately, in 2015 Le Galion was resurrected once more and is now in the reflective and sensitive hands of French ownership for the first time in over 30 years. Director and major share holder Nicolas Chabot is working hard to restore the brand to its former acclaim. 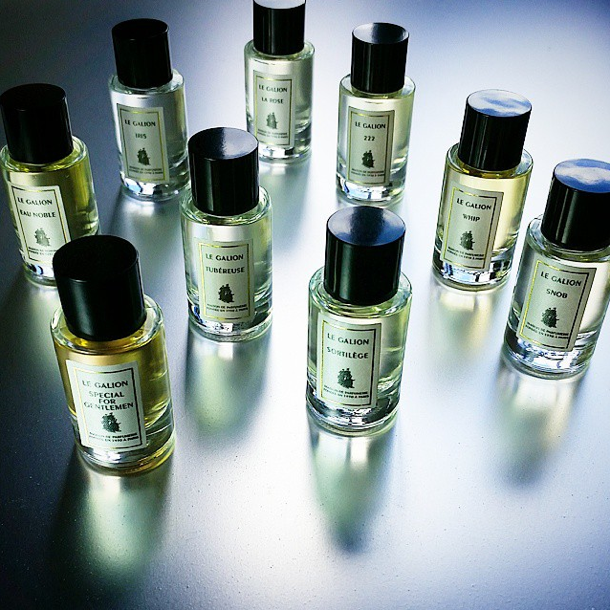 To date, Le Galion have relaunched 9 captivating scents from their impressive back catalogue; the jewel in the crown arguably being the highly-revered Sortilege... a scent that stormed the world both pre and post WWII. But it begs the question... does Sortilege - a scent created some 80 years ago - still remain relevant in the here-and-now? Are its wiles and charms that once bewitched flappers and sheiks, silver-screen sirens, soldiers and sweethearts suddenly lost on the selfie-snapping sheila of 2015?
Well, it would be one thing to compare and contrast old and new - to pick apart accords and write reams about reformulation... but I feel it would be of little consequence. Le Galion today - whilst observing a keen sense of tradition - is something to be discovered carte blanche. Nine exquisitely-crafted reissues just beg to be explored... and as yours truly can attest, one could not wish to be taken on a more thrilling journey!
Here's where I haul anchor and set a course to briefly touch upon each of these 9 'modern' classics.


Sortilege - 2014 (orig. 1936)
The highly venerated perfume upon which the House's reputation was built is every bit as enchanting today as I expect it was yesterday. A floral-aldehydic flight hints at the golden splendour of yesteryear, whilst narcotising notes of jasmine, mimosa, narcissus and rose reside at the tremoring heart of this composition. Sortilege feels commanding and assertive, without a hint garishness and pretension. A woody, ambery, musky trail leaves a captivating wake, which is resolutely feminine and devoutly self-assured.

Tubereuse - 2014 (orig. 1937)
Whilst its name might suggest a touchstone tuberose soliflore, Tubereuse is far from it. A prepossessing perfume with a delightfully saccharine opening, it feels like air-spun candy with a whisper of pear and pink berries. Its nucleus, however, is steeped in the carnal warmth of tuberose, rose and orange-flower which steers it away from a simple sugary lolly-water to a delectable and somewhat wanton scent, awash with sensuousness. An ambery, musky foundation renders Tubereuse a enchanting feminine that and fascinates and surprises.

Another perfume poem rhapsodising over a single flower, Iris is a spectacular study in elegance and refinement. Not too dissimilar to Hermes' Hiris in it's approach, Iris not only takes a snapshot of the deep purple blooms, but also gives a sense of the whole plant. A sparkling citrus flight with a huff of velvety ambrette draws one's nose to the beautiful dry iris note at its heart. A sense of deep, earthy green is furnished by galbanum and cedarwood - the sum of these components paints an impressionistic  canvas with mottled purples and silvery-greens. Infinitely sophisticated and adamantly appealing.

Special for Gentlemen - 2014 (orig. 1947)
After the atrocities and paucity of the second World War, the world saw a gradual return to luxury and lavishness. In response to a shifting post-war cognisance, Le Galion released Special for Gentlemen, which even today suggests sumptuousness and a sense of impeccable grooming. An incredible blend of citrus, lavender, spices, resins, animalic notes and oakmoss, Special for Gentlemen calls to mind the fresh yet lingering Jicky or Mouchoir de Monsieur - both mainstays in the Guerlain perfume stable. Noble refinement and savoir faire personified.

La Rose - 2014 (orig. 1950)
An ode to femininity, La Rose is a captivating floral which combines the cashmere softness of violet, peach and rose to evoke the velvety texture of warm, unsullied skin. A sensual penetrating vein of ylang ylang, lily and patchouli lend a flush of desire to the composition, whilst a vanillic/musky base creates a bewitching sillage. Pretty, youthful and unspoiled... a blushing virgin whose hair dances on the air and laughter rings in the ears.


Once touted as the "most exclusive perfume in the world", the delightfully named Snob brings a new nuance to the Le Galion portfolio with a rousing blend of fruits, flowers and spices. To a modern nose, it feels somewhat middle eastern in style, in that it holds notes which have been used in perfumery across the Arabian peninsula for millennia, specifically jasmine, rose, saffron and sandalwood. Snob - just as the name might suggest - is bold and commanding... an "all eyes on me" scent perfect for large social gatherings. Whilst brimming with components reminiscent of the souks and medinas of the East, Snob surprisingly manages to stay infinitely French in its execution.

Whip - 2014 (orig. 1953)
Very much a return to the tradition of classic cologne, Whip has a timeless appeal with its blend of sharp citrus and stirring aromats. Crisp bergamot, fragrant tarragon and soft lavender pay tribute to time-honoured perfume pillars of the past, but its the foundation upon which all these notes have been assembled that perhaps gives Whip its backbone: vetiver, patchouli, oakmoss and bitter leather. Originally intended for men, Whip resides in the same universe as Dior's Eau Sauvage or Chanel's Pour Monsieur. Old school, but in all the right ways.

Eau Noble - 2014 (orig. 1972)
As Le Galion stepped over the threshold of the 70s, a social revolution was taking place in which gender lines and gender roles were swiftly being blurred... Eau Noble was created from this movement as a universal scent for both men and women to enjoy. A beautiful soft leather fragrance, Eau Noble is brimming with fresh citrus, woody-green galbanum, green sage, fragrant lavender, geranium and oakmoss... the sum of its parts feel every bit as dignified and striking as its name implies. An ageless composition that still feels very relevant and equally as engaging today.

222 - 2014 (orig. date undetermined)
A forgotten and unmarked perfume bottle recently found in the 1930's Le Galion archives has now seen the light of day for the very first time. A captivating amber oriental, 222 possesses a certain warmth that makes for a stunning signature scent. A blend of precious woods, myrrh and styrax, leather, vanilla and oakmoss, this scent has a genderless appeal that is both sensuous and comforting.  An exquisite creation which flits somewhere between Diptyque's vintage Tam Dao and Xerjoff's Modoc, 222 is arguably the warmest and most tactile of all the Le Galion perfumes to date, and has swiftly become one of the author's favourites. 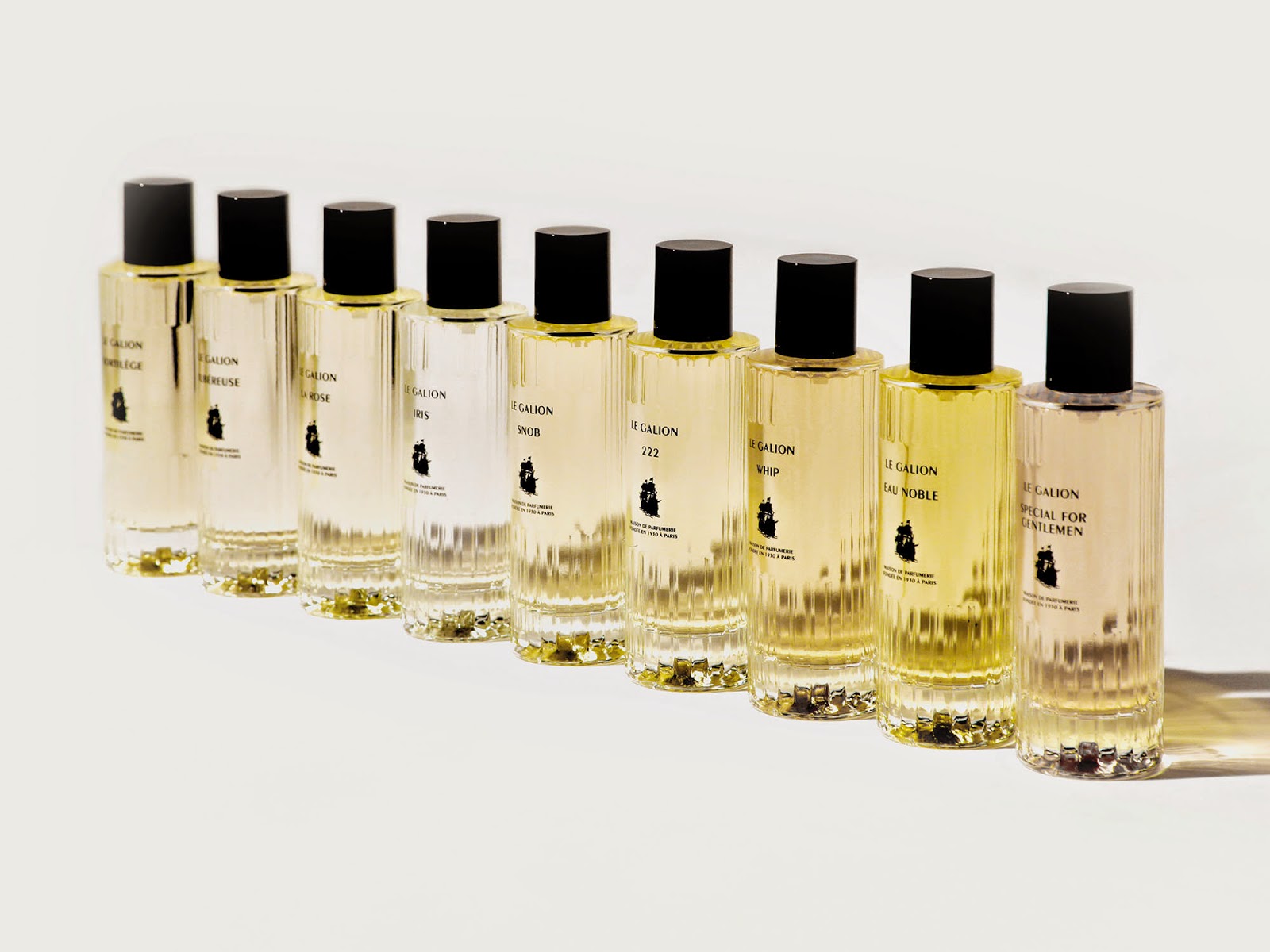 With endless beauty abound, Le Galion has well and truly set a course for renewed success in the two-thousand-and-teens. Armed with a flotilla of fine fragrances of exceptional quality and beauty, I am excited to see the next chapter in the course of this revered House's history.

For more information, visit legalion.fr and for customers wishing to experience these scents here in Australia, they are now available through Peony Haute Parfumerie in Melbourne.