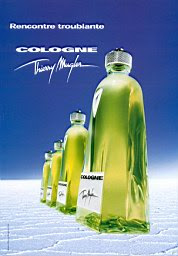 I can't pinpoint exactly why I have been putting off writing about Thierry Mugler's unisex masterpiece Cologne. In some ways I feel I have been avoiding it because I felt my words simply won't do it justice. This is a scent that I celebrate with every fibre of my being! A scent that has never once been absent from my fragrance wardrobe since its launch back in 2001.
I was fortunate enough to be working as a Mugler Ambassador at the time of Cologne's release. I had been hired by Mugler's distribution company to man the Theirry Mugler counter in one of West Australia's flagship department stores. I was known as "that guy who works for Angel" by shoppers, who would pass me by, exchanging odd stares between themselves, and snide remarks spoken in whispers. But I was undeterred... I was already a dedicated disciple of the Mugler Universe, and took pleasure in working with a luxury brand that I adored and admired. Up until its release, I had worked for more than a year with the Mugler portfolio of perfumes that had surrounded me in twinkling glass stars and shining metal flacons that held elixirs violet-blue in hue. Angel and A*men were scents that were daring and dramatic, and either repelled or attracted people around me, like orbiting celestial bodies.
When it was finally announced that Mugler was to launch a "universal" scent for both men and women, I was excited. I attended my Cologne training with enormous enthusiasm... and was stunned to find monolithic flacons of vivid green juice had replaced the thorny violet ones. 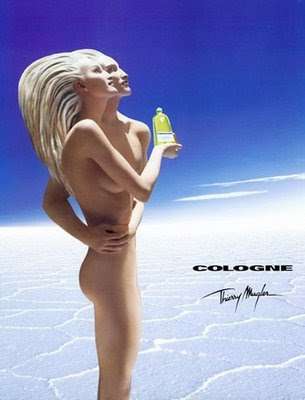 Thierry Mugler's approach to creating Cologne, was to draw upon the historic culture of cologne, and thrust it forward several hundred millennia into a far-flung spacescape. He wanted to create a synthesis of fragrant molecules that would unify men and women, and honour the idea of androgyny. This, he succeeded in evoking with the striking imagery that supported the launch: a depiction of a two-headed figure that share the one body, and whose limbs are intertwined in a grotesquely inorganic manner. Curiously though, it is an image that also succeeds in communicating an astonishing sense of harmony and balance.
This dramatic paradox can be said for the juice as well. Its fluorescent fluid is an interesting contradiction... communicating something noxious or wildly unnatural; whilst the very nature of "green" insinuates something restorative and replenishing... as though drawn from a spring or fountain of youth. The bottle, also implies opposing elements:  its broad, sloping shoulders suggests something futuristic and regimental, whilst at the same time, echoes pre-historic symbolism (compare the monolithic statues on Easter Island, for example).
The perfume itself is also an oxymoron... it is brimming with clean, striking, soapy freshness - drawing upon the pristine vitality of mother earth - though much of its composition is synthetic in nature. At the surface of this scent, re-energising citruses dominate, but beneath, the heart is very organic in nature. Cologne is said to emulate the smell of freshly scrubbed skin, and the molecule used to suggest living matter is the now-famous "S-note", trademarked to the house of Mugler. During my training session, Cologne's individual fragrance accords were passed around in tiny vials for the sales associates to smell. The "S note" however, was packaged as a molecule-soaked cushion kept in a screw-top container. We were warned prior to opening it, that most of us would find it challenging to the nose. With trepidation each of us sniffed the container and inhaled what all could effortlessly recognise as post-coital secretions. We were all instantly appalled and intrigued. This famed accord encompassed the most fundamental odour of life itself! It became clear to me, why the house of Mugler had endeavoured to build Cologne around it. It is genderless. It is familiar. It is basic. Regenerative.
Since the success of Mugler's Cologne, other perfume houses have borrowed from the concept - some choosing to append various accords (the topnotes of Jasper Conran Man), and others, unashamedly attempting to recreate it (Creed's Original Vetiver, and Gaultier's Monsieur eau de Martin). In my eyes however, Cologne will always be revered as the yardstick against which copycat creations will henceforth be measured. Mugler's meticulous eye for detail, and his breathtaking ability to tell a story with perfume are second-to-none.
If Cologne is anything to go by, we should look forward to the next time the house of Mugler transports us off to extrasolar landscapes around the Mugler galaxy.
11 comments: