Ebay: a word to the wise

Buying perfume on ebay can be a frustrating affair. I have personally had some excellent success stories, but have also heard of many disasters. I'm not about to recount any of them here, although I would like to offer some words to reflect upon. 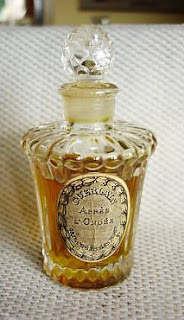 Two days ago I was in two minds about bidding on a vintage bottle of Guerlain's Aprés L'ondee. I had come across the auction with only moments left in the sale... the bottle was beautiful, and much to my surprise, almost full. I was undecided only because I wasn't certain if the object of my desire (pictured) was indeed a vintage formula, or the modern reissue. I knew little of either, to tell you the truth, which is what made this auction all the more appealing. The seller had mentioned in the copy accompanying the auction, that "not much of the smell had been retained". With seven minutes and six seconds left, the highest bid was a modest 13 pounds. How could I lose? At that price (and a bit more), I would be delighted to own the bottle alone!
The hardest thing to decide (with 5 minutes and fourty-two seconds left in the auction), was what my highest bid would be. "Not much of the smell has been retained" had burned into my retinas, so much so that I could still read the words from the screen from behind my closed eyelids. I pondered a moment as I watched the seconds slip by.  At 4 minutes twenty-two, I sent a message to the seller, hoping they would be online and able to answer my query immediately.
"Does the perfume still smell at all? Can you describe it?", I typed and then hit 'send' as the countdown slipped beneath the four minute mark. I waited, all the while watching the shifting obnoxiously loud red numbers blow a wet raspberry at me.
At 1 minute sixteen, after I had completely talked myself out of a possible purchase, I received an answer: "Still smells great but too old fashioned for me", was the reply. Old fashioned?! I thought... sounds right up my alley!
I scrambled! Fourty-four, fourty three... still no additional bids! Refresh page. Thirty six, thirty five... WHAT IS MY MAXIMUM BID!?, I panicked, twenty eight, twenty-seven...
My fingers punched in a random number 36.01... seventeen, sixteen... I hit the "confirm bid" button. Refresh page. No other bidders! My heart was hammering in my chest and I could hear the blood rushing in my ears... five, four... refresh page!...
After the auction ended I sat for a long while, waiting for my heart rate to return to normal, and for my hands to stop shaking. I felt very self-conscious all of a sudden. The alarming red numbers had been replaced by a dirty red cross. Outbid by a pound. One measley pound!
I was left thinking about what I might have paid someone, had I come across this item at a flea market, or an antique store. Fifty pounds? Sixty? Eighty? One hundred? Vintage bottles of Aprés L'ondee have sold for up to $600 before, so why in God's name was I bidding a pitiful 36 quid (and one pence)?! WHAT WAS I THINKING?
The moral of this story is simple... when buying what may seem to be the 'deal of a lifetime on ebay', then bid big. Someone out there is having a laugh at my expense tonight as they dab on glistening spots of vintage Aprés L'ondee... one that was had for a pittance.

How incredibly disappointing. My mother always said to me, if you see something you want, buy it, because it might not be there when you go back.

The motto of the story? It's the things we regret not buying that we kick ourselves over.

Oh my. 1 pound is close. you have my regrets shared.
I remember not buying one... it still haunts me.

I promise I'm not laughing at your expense, but I've been in that same situation and I know the pain and the feeling that someone was saying "neener neener" (that person has been me before) as I clacked away from the page with head hung low.

I think we have ALL been there D.

You are aware that there are third party softwares, in use by many EBay sellers, to bid at the very last minute without having to do it manually. That is most likely what happened, with your ALO bid. They're called sniper programs (I personally don't use these) and you can find more info about them here: http://news.iwantcollectibles.com/ebay-snipe-review.shtml

Yes, Im aware of the auction sniper software, but given the time frames involved here, I hadn't time to set one up. BID BIG PEOPLE! BID BIG!!!

Oh, poor you!
Though you'll never know how much the other party had as a maximum bid - they may have had a $200 bid up for all you know. If that were the case, and you would've entered a high maximum bid, too, it wouldn't have been a bargain for either of you.
Small comfort, perhaps.

Having been there too,(I lost an item by a paltry 46 cents) I decided to go the sniper route and I've had better luck doing it on my own. The sniper sites will tell you that ebay always has the final say. On two occasions I was told that I was the winner,only to find that someone else had placed an earlier bid at ebay! The advice that ebay gives you has worked the best for me, decide what your absolute maximum bid is, and place it asap. I've won items that I'd bid on days earlier, that someone else had bid the same exact ammount, only my bid had been place earlier than theirs. If you decide to try an auction sniper, some of them will give you from three, to six snipes free as a trail. My advice is, if your heart is REALLY set on something DIY !

I linked to your blog from basenotes, thanks !

I try to restrict my bidding to things I've decided I really want. I pick a top price, typically 1/2 what I think I'd pay in a store. After all, there will be postage, and there's some risk that the juice may not be good. If I don't win, I look again the next day.

Of course this doen't work for a unique item.

I guess the bottom line is, what's the bottle worth to you? At the moment I wouldn't pay $600 for the first bottle of Chanel No. 5, even if certified filled by Coco herself. But next year...who knows?