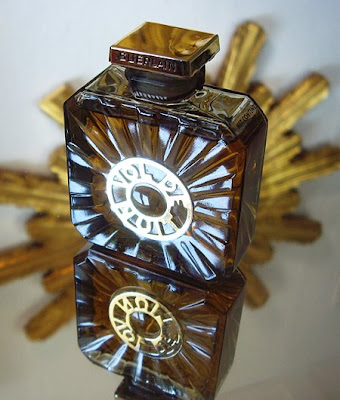 Today's blog is not a review... it is more of a monologue about a pivotal moment in my scented journey through life - a life changing experience - so I beg that you please indulge me.

Guerlain has been one of those houses that I have grossly misunderstood. Years ago, whilst working in the industry as a fledgling sales assistant I was uninterested with their perfume portfolio; back then favouring the likes of Azzaro Chrome and D&G Homme over Mitsuoko and Shalimar. "Stuffy and uninteresting" I had proclaimed, with an smarminess that now makes me wince. In the ensuing years however, and with increased exposure to a varied array of scents, I learned to broaden my horizons and came to truly understand that hindsight is indeed, 20/20.
This being said, I have never been really enchanted by any Guerlain release. I had sampled their standard range in downtown doors, but never actively sought after the rare blends and discontinued gems that many people spoke of. Pourquoi??! I hear you ask... well, basically because nothing I tried had ever really knocked me off my feet. I figured 'Guerlain' an industry buzzword which only fuelled my desire to rebel!

I don't know exactly at which point my perspectives shifted with regard to this perfume house. Perhaps it was a surprising encounter with someone wearing the stirring L'Heure Bleu at a dinner party... or maybe it was whilst browsing this website: a virtual museum built by a Danish man out of adoration and passion for Guerlain and their scented masterpieces. Whatever the case, it was enough to re-ignite my interest. Within a couple of weeks, I came upon a stunning 30ml sealed bottle of vintage Vol de Nuit Extrait on the web, and after much deliberation (and quite unnecessary peer-pressure!) decided it would be mine. A blind buy of epic proportions!


The package arrived in the mail yesterday and I scooped it from my doorstep like Moses from the 'rushes. I literally heard angels trumpet and a choir of celestial voices. I mean, I had he-ooge expectations... it was Guerlain, it was vintage, it was extrait, and it was $225! I was going to love it, by jingoes!
I spent a good part of the afternoon turning the wonderful 1960's zig-zag and zebra stripe packaging over in my hands, and photographing the stunning glass flacon. I tugged at the ageing thread that held the seal intact, wondering how I might succeed in opening it with a minimum of damage. I sniffed at the tight neck of the bottle and got nothing but a small dent in my nose that faded rapidly from white to pink. I looked at the receipt for my purchase with a frown... yes, I was going to love it. Wasn't I?
Please?

I decided to sleep on it.

I found myself staring at the bedroom ceiling at 4am whilst the crickets chirruped outside my window.

Then the sun came up.

So today was the big day. I thought it rather peculiar that I drank my morning coffee with butterfiles in my stomach; my eyes never really losing sight of the box sitting on my desk. I felt giddy with anticipation, despite having had no sleep, and looking as though I'd been dragged 100 yards under a bus. But with trembling hands, I removed the flacon from its packaging and carefully trimmed the cord holding its stopper in place. I gave it a tug.

I put the bottle in the fridge and went and had a lie-down, feeling as if the world had conspired against me.

45 minutes later I was back at my desk with bottle in hand. I could feel that the stopper had shrunk slightly, so I gave it a gentle twist. The stopper lifted and the seal let out a soft hiss as the perfumed air escaped for the first time in almost 50 years. 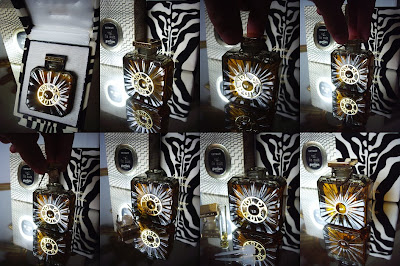 I pressed the moist glass stopper to my wrist, waited a few moments and inhaled. I lingered for many seconds... bitter green, opulent jasmine, galbanum, dark woods: and then an unanticipated feeling of boundless beauty and of overwhelming sadness. I felt as though the Vol de Nuit was telling me a story in whispers from behind a cupped hand held over my heart. I was no longer conscious of individual perfume accords - instead I experienced something way more poetic... something monumental. It was a perfume narrative, and the experience almost bought me to tears. I recalled the otherworldly 'sigh' I had heard when opening the bottle for the first time, and felt for a moment as if I'd liberated a genie from her lantern... perhaps one that was lamenting a love lost over the ages; her passion and sorrow swelling on the air. Such love! Such beauty! And such despair!

I replaced the stopper and sat back in my chair for a while, allowing the narrative to tell me of winsomeness and woe, all in striking colour. Never before have I been moved by a perfume in the same way as I have today. As cheesy as it might sound, I feel as though I have crossed some threshold and stepped into a whole new state of consciousness, and it was this vintage Vol de Nuit extrait that held the door open.

I don't know if I just got lucky, or indeed if many of Jacques Guerlain's creations are as absorbing as this one. What I do know, however, is that I will never look at this house, or at perfumery in general in the same way again.

VdN extrait is something special. I highly recommend you wear it one evening when the climate is cool, rainy and windy - IMO, the perfect 'space' for this scent unleash it's bittersweet narrative.

I can't wait to own my very own bottle. One of these days...

VdN extrait does do something to me too. I adore it and I enjoyed your article very much ,having had a similar experience though with the present day extrait. The vintage must be close to a spiritual experience. Thanks for the VdN piece !

Ahhh...Dimitri don't you wish everyone could experiene that just once?
I was lucky to experience it with diorissimo at the tender age of 12 in 1966...
And Vol de Nuit July 4 2008 as we boarded the night flight to Florence for Sniffa. Perfect , huh?
Nancy from fishbone always wears it when she flies...

Dear D,
You know I read but never comment, but this time I had to.
I LOVED what you have written, once again your passion makes me so proud to know you and I felt every word.
I am happy for you that you have found appreciation for Guerlain

I too have recently fallen in love with vintage Vol de Nuit. After trying the current extrait these past years, I decided to take the plunge on a vintage bottle of Vol de Nuit. I always appreciated the current extrait, but found the big dose of civet in the topnotes slightly synthetic and unpleasant (although I'm pretty sure Jicky lovers don't mind :) When I first sniffed my vintage bottle, I was surprised that I couldn't find any civet, or at least the amount used in today's version. What I was left with the current version, is an extremely melancholy accord of dusty spices and creamy vanilla. I share your enthusiam and passion and congradulate you on an amazing buy.

Although I've only tried this in vintage EdT, it's stunningly beautiful. Someday I'll own a propeller bottle, that's for sure!