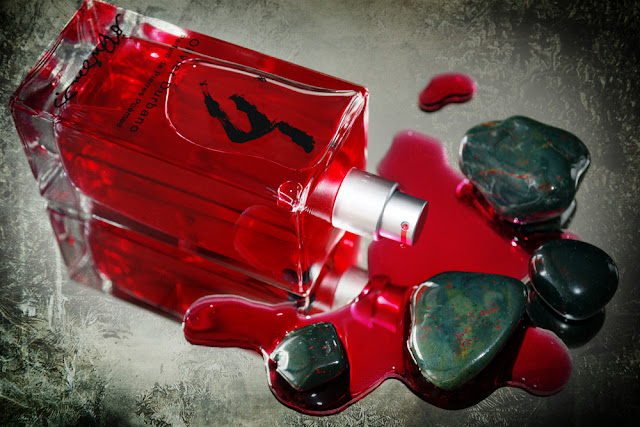 This image is the author's own, so please do not use without permission.

French jeweller/perfumer Olivier Durbano has an insatiable approach to his work. His eye-popping collars of semi-precious stones are constructed with both a masterful hand, and a keen consciousness of the raw materials he is working with. In 2012, Durbano chose the stone Heliotrope to feature in his work, and true to his own tradition, it also served as the inspiration behind his latest perfume release, which he revealed at Fragranze in Italy last month.

Heliotrope is known perhaps more commonly as Bloodstone, or Dragonstone; a variety of chalcedony which is chiefly a deep green colour, speckled with rich red jasper. Worn as a talisman to protect against the evil eye, and to aid with blood-related disorders, it has been a stone coveted throughout the ages by both Christians and pagans.

As with all of Durbano's perfumes - one can't help but recognise a hint of antiquity at hand. Not antiquity so much in the sense that his creations are like the classical pillars of perfumery, but rather "antiquity" defined in a primitive sense. Heliotrope is such a scent... one that commands instant reflection... it conjures scenes from archaic ages... of warring empires and primordial battles; of far-flung cities buried in the sand; of the prehistoric asclepions and sanctuaries of healing.
Perhaps more than any other of his accomplished perfume releases, Héliotrope not only memorialises this semi-precious stone, but also tells an ancient narrative.

One does not quite know what to expect when first applying this deep crimson juice, or perhaps if one does, I am almost certain their assumptions would be wrong. Heliotrope opens with a sharp mandarin accord, but it is instantly diminished by a combustable chilli-pepper warmth. A component of many fragrances from the Near East, saffron is a major player here... it is heady and piquant. It's texture is syrupy, almost medicinal in nature, which adds complexity and a sense of luxuriousness. I sense florals - angelica, magnolia, heliotrope - swimming at its heart, but there is also a curious sense of green.
A damp, sodden woodsy green, like the smell of the forest floor after a deluge. I've not smelled Nagarmotha as an isolated raw ingredient, but it is listed as a component here, and I recognise it from other scents like Amouage's Opus VI and Mona di Orio's Oud, and I feel it contributes to this grassy, woody, slightly astringent aspect. Notes of sandalwood and cedar also bring with them a bountiful sense of comfort.
As it develops, Heliotrope feels multi-tiered with layers of warmth and coolness... a huff of musk lends a luke-warm "organic" feel... like the smell of skin at blood-temperature. I ponder for a moment, wondering if this was a deliberate (and genius) attribute to include. Durbano's remarkable and much loved "house accord" of incense and tree resins makes a firm appearance in Héliotrope's drydown... lavish tendrils of myrrh, oliban and benzoin which furnish each of his perfumes with an exquisite earthy, mineralic quality.

There is something resolutely personal about how this perfume blossoms over time... it feels both intimate and curative. I imagine an ancient spa or asclepion with clay pots full of salves, unguents and balms that are rubbed into tired muscles and anoint the wounds of ancient heroes and heroines. Héliotrope, the perfume, stays true to the stone's metaphysical purpose... is indeed reparative and protective.

Once again, Monsieur Durbano's incomparable cognizance of stones and their spiritual meaning makes for a compelling and thought-provoking creation.
One of his very best.

Wow, given the name, I wouldn't have expected this to smell at all like the descriptions I found in your review, but now I understand! I hadn't ever heard of Bloodstone referred to as Heliotrope before, and not knowing a lot about gemstones, was unaware of its historic use as a talisman to ward off the evil eye (love that ... it always feels wickedly good to say the words "the evil eye" out loud, btw!). Judging by your review, this perfume has an arresting potency about it that seems fitting with the blood-red color of the juice.

Fascinating review of what is evidently a very interesting fragrance. I love that picture too: very arresting.

Thanks Suzanne, and thank you Chris. Its wonderful you stopped by.

I dont think I can say enough about how I find strokes of genius in Durbano's work. His intoxicating heat in Black Tourmaline, his curious turpentine accord in Turquoise and his compelling powdered rose in Pink Quartz. Heliotrope feels like another in his series which commands a moment of reflection.