In-house Annick Goutal nose Isabelle Doyen has a resumé of perfumed creations that reads like a shopping list of the rich and rare. Having studied as Goutal's apprentice prior to her passing, Doyen inherited her master's keen intuitiveness and passion, which translate into a portfolio of fine fragrances that are resolutely French in their approach.

In 2000, Goutal launched the polarising masculine Eau du Fier to a mixed reception. A scent that focuses chiefly on the marriage of organic birch tar and black tea, Eau du Fier is quite possibly the blackest, sootiest perfume one might ever encounter. Coming right off the back of a decade of sanitised androgyny in perfume, Eau du Fier proved the absolute antithesis of perfume models that were popular at the time. By 2005, it had been already been retired. 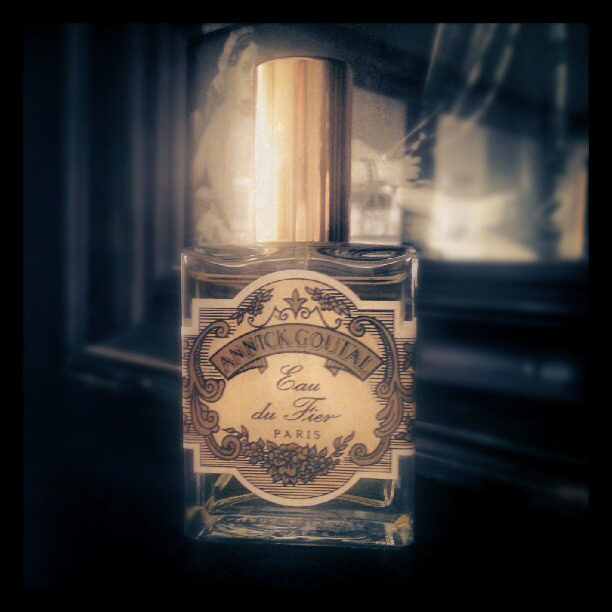 In the years since the early 2000's, appreciation for niche, rare and artisanal perfumery has grown exponentially, thanks in part, to flourishing fragrance communities both online and offline. How peculiar that the scent which was globally rebuked in 2003, is now generally regarded by perfume aficionados in 2012 as a triumph, and arguably Doyen's magnum opus.

Olfactory notes aside, this fragrance launches from the flacon like a flame-thrower - an impenetrable wall of fire and embers, fed by combustable accelerants. On skin, Eau du Fier is equally as uncompromising... I am automatically transported to mechanic's workshop... I smell of a man who has worked under a car for a whole day; hands blackened with grease lying on a floor littered with oily rags. Open jerrycans in one corner reek of evaporating gasoline, whilst in the other, a fire is burning in a barrel that has been lit with small combustable firestarters. This daydream plays out for 6-8 hours, until a final lingering huff of smoke eventually vaporises from my skin.


Black tea and tarry birch are the key components upon which this perfume is built, but one has to turn away from the vivid film playing out in their mind's eye to become cognisant of the individual accords. Doyen's masterful hand has interwoven subtle floral nuances of osmanthus and herbaceous/citrusy facets into this scent, which can only be picked when one knows where to look. Every note is treated like a fine brushstroke, forming a small but integral part of the whole.

Eau du Fier will unquestionably evoke a response in the wearer. Some will fan the air around them and cough and wheeze, and others will sit, silent, and wait for the visions to begin.

If only more perfumes could be as accomplished and profound.

Dimitri, I'm so happy to discover that you've reprised your blog. Your writing is such a pleasure to read ... you were meant to do this, in my opinion!

I've not tried Eau de Fier, but as I have never really liked a strong petroleum smell (the mechanic's workshop you talk about ... this smell is why I also can't embrace Knize Ten), I don't think this one is for me. Still, it was lovely and illuminating to examine it through your essay.

Nice to see you back Dimi. You're too good a writer and photographer not to jump back into the fray. :)

You had the best fragrance blog I know of and I fully expect your return to continue that trend.

I look forward to reading your posts !

Thank you Suzanne, I'm delighted you visited, and thank you for your comment. :)
I think, given your aversion to petroleum-related odours, that Eau du Fier may be quite a challenge... however in terms of its artistry, I think it is very much an eye-opener.
Looking forward to having you back here soon.

Aromi, its always a pleasure to see/hear from you! Thanks for your kind words. I'm delighted to see your blog forging ahead as well... your recent article on NEJMA 3 got me all hot and stuffy under the collar.... I think its a must-try. :)

It's one of the most daring fragrances from Annick Goutal and I avoid to wear my 10ml decant of this one because i know i'll not last a lot =/
Dimi, your review made me think of SMN Nostalgia, do you see similarties between them? Also, was this one discontinuated only due bad commertial performance or is there anything severely restricted on it?

Hi Rick, no - apparently sales were lacking.
Birch also became a restricted component around 2004, and Eau du Fier has loads of it. :)

Great review Dimi!
This scent is not longer available on the market and it is quite a pity as it was a very well balance between black tea and fresh green tea.
If you like this kind of smoky bacon notes you will love La Treizieme Heure de Cartier (13th).
Cheers!
Alx

Thanks for your comment, Alex!
I have this Cartier scent... the smokey lapsang souchong is treated in a similar manner, but the birch tar in Eau du Fier is simply titanic, and takes it in a different direction (to my nose at least). :)
'La Treizieme Heure' reminds me somewhat more of 'Route du Thé Pour Homme' by Barneys of New York.