The most successful masculine to emerge from the house of Hermès in recent times is irrefutably J.C Ellena's woody/spicy triumph Terre d'Hermès... a scent launched in 2006 that went on to win the FiFi (Fragrance Foundation's) Men's Fragrance of the Year accolade in 2007. Ellena's proficient nose produced an eau de toilette that simply won the world over. Now, some 7 years on, Hermès have revisited Terre and breathed new life into its lungs with the launch of Terre d'Hermès Eau Trés Fraîche... a woody aromatic comp with an engaging thalassic slant. 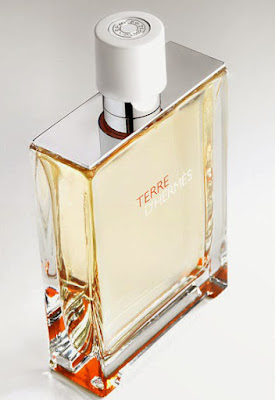 Just before I continue with my review, I would like to pause for a moment to address the Hermès house accord that seems to have become more conspicuous in Ellena's recent work. To my mind, Jean-Claude has looked to the house's past to unify the modern Hermès perfume stable; particularly with the masculines. If one looks back at Roudnitska's masterwork Eau d'Hermès (1951), a genderless spiced-citrus splash with leathery animalic undertones, one can distinctly hear an echo in the opening notes of Ellena's latest 'Pirate' Hermessence Épice Marine. Similarly, Bel Ami Vetiver  (a new addition to the perfume portfolio in 2013)  opens with a distinct Eau d'Hermès bergamot / cinnamon quickstep before veering off into classic Bel Ami territory. The house's unique fingerprint - or Hermès DNA - appears to be more prominent in contemporary releases, which I - for one - am excited to see. It may come as no surprise then, that it also makes an appearance in the arresting flight of Terre d'Hermès Eau Trés Fraîche.


Eau Trés Fraîche, out of the gates, feels a little like one of the Hermès Eau de Colognes... in fact, Eau de Pamplemousse Rose springs to mind in the cursory moments it dances on skin. Grapefruit and bergamot meet the nose with a zesty tang that is somewhat less sweet than the pulpy orange opening of Terre d'Hermès... it already feels more sheer and diaphanous than its older sibling. Moments later, the familiar Eau d'Hermes prickle of spice, pale woods and leather wash over the nose, infusing it with evocations of yesteryear. But it is in this next phase that Eau Trés Fraîche starts to shift trajectory... a pelagic, watery facet shifts forward, proffering an almost saline quality. (I wonder whether the ocean-like algenone accord Ellena used in Épice Marine might have been re-introduced here)? The heart is awash with geranium that is both citrusy and aromatic, but the whole composition remains translucent and somehow feels almost blanched.
Interestingly, the dirt, slate and ozonic aspects that made Terre d'Hermès a hit feel all but absent in the Fraîche version... my nose struggles to  draw parallels between the pair, save for the warm woody foundation that both have in common and that both have been built on. Base notes notwithstanding, this scent is noticeably more fleeting than its big brother.

Terre d'Hermès Eau Trés Fraîche is a surprising departure from the original Terre, but one cannot feel disappointed with this fragrance that promises to deliver a cooling aromatic respite from the heat over the coming European summer. Terre d'Hermès Eau Trés Fraîche comes as a 125ml eau de toilette which is already available in France, and will be soon rolling out to other European retailers.

Unfortunately for us Aussies, we can expect an August / September 2014 release to coincide with the start of our southern spring.

Hello Dimitri:)
This is the my humble opinion!

I tested it today on my way back home from my beach holiday at Alicante airport. It is a weaker version of the original, where the mineral notes are replaced by aquatics(a slightly sea-like note).
Main differences:
It starts very citrusy and aromatic and remains quite linear in a translucent, wet way-
The geranium here is more prominent and it's accompained with a spicy cardamom, pretty much on your face on the first 30mins after application. It has a heavy, aquatic facet, almost salty, (to my nose, the same algenone accord as in Épice Marine)

This is a nice fresher variation if you enjoy TDH, but also you find it overpowering during summer. Probably the best of all 2014 summer fragrances so far.