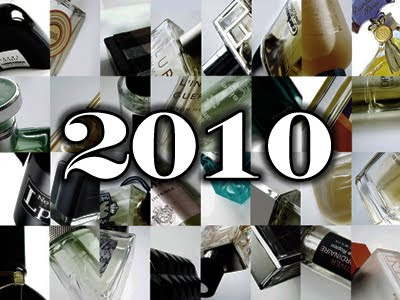 This year Sorcery of Scent is pleased to be a part of the 2010 End-of-Year blogging event in which 14 avid blogs revisit the year that was and hand out gold stars for the scents that impressed, and red crosses for those that failed to come close.
(Be sure to visit the full list of participating perfume blogs at the bottom of this post).
Here are my picks for 2010...

Most desirable Flacon of the Year: L'Abeille de Guerlain
Yes, it costs an arm and a leg, but who can argue that the spectacular bee-shaped Baccarat crystal flacon limited to only 47 pieces worldwide isn't just the bees knees? Je l'adore!

Niche Perfume of the Year - Unisex: Pink Quartz - Olivier Durbano
Durbano's inspired spicy chypre Pink Quartz appeals to both men and women... its delicate rose heart is piquant with fragrant saffron and Somali oliban. It had tongues wagging all over Esxence.
Runner Up: Opus III - Amouage

Designer Perfume of the Year - Unisex: Wonderwood - Comme des Garcons
Quirky yet classy, Wonderwood crammed every possible wood accord into one bottle, and still managed to create something understated, sophisticated, and very avante garde. Two thumbs up!

Best Reformulation of the Year: Onda EDP - Vero Profumo
The lavish old-world atmosphere of Onda extrait has not been lost in this brand new eau de parfum incarnation. In 2010, Vero Kern tweaked the topnotes in the EDP to add more infinite depth and character. 10/10!

Worst Reformulation of the Year: Opium - Yves Saint Laurent
Booooo! Hisssss! L'Oreal have destroyed an old classic. Not only does the new flacon look cheap and tupperware-like, the new Opium formula is now a sad shadow of its former self. Yves must be turning in his grave. Unforgivable!

Best Emerging Luxury Brand: XerJoff
XerJoff went from strength to strength in 2010 as they expanded their portfolio of exceptionally crafted fine fragrances. Superb craftsmanship, quality materials and meticulous attention to detail have catapulted them into the stratosphere.
On a personal Note...
This year I had the pleasure of truly discovering the house of Guerlain. It has been an infinitely rewarding experience, and one that I feel will be ongoing.
On the whole I probably spent much more money than I should have, and much more time on the internet than perhaps my family might have liked; but as Sorcery of Scent steps over the threshold and into its 4th year, I would like to thank YOU - the reader - for your valued readership, contributions, comments and support. You make what I do worth the effort and the time spent in this noisy swivel-chair!
Happy New Year! Many rewards and blessings be with you in 2011.
Dimitri.
Check out the other participating blogs by clicking on the following links:
I Smell Therefore I Am, Scent Hive, The Non Blonde, Smelly Blog, Roxana Illuminated Perfume, DSH Notebook, EauMG, A Rose Beyond the Thames, All I Am A Redhead, Schreibman's Live, Portland Fragrance Examiner, CaFleureBon, Persolaise

Dimitri,
I too really enjoyed discovering Idylle this year and have been a little surprised that it didn't receive wider praise. And unfortunately I have to agree with you regarding Belle d'Opium. What a disappointed, and such a lovely bottle!

Thanks for a great post and Happy New Year!
Trish

I'm very, very curious - and also rather frightened! - to ask if you've actually bought the splendid Baccarat bee for Guerlain. If you have, please tell us: is the perfume any good??

Ah Guerlain- the year I fell in love with the old Guerlains was my best perfume year ever- it was like finding a whole new art form- and I think I still admire Apres L'Ondee, LB and Mitsouko above all other perfumes.

I hope the new year brings you many rewards, successes and adventures, both personally and professionally!

Persolaise: Alas no, the stunning L'Abeille de Guerlain presentation is a bit too far from my grasp... but the perfume inside is stellar! <3

Rose, may we both enjoy the offerings of this extraordinary house for many years to come! Happy Holidays!

Thank you for some DIFFERENT choices. :)

I love the way you created your list. :)
I think we all spent too much money on perfume but since it brings so much joy, I don't worry too much.

Wow - so many perfumes, so little time!

I have been discovering Guerlain love this year too - for some reason I never liked very many of their perfumes when I was younger, but I am finally appreciating them, even though my favorite is still that youthful upstart Nahema.

Dimitri -- Yes inndeed, blogging can become more time-consuming than one might have been bargaining for. But please know your articulate, well-researched and always insightful writing is much appreciated, and I'm sure I'm not just speaking for myself. Keep up the excellent coverage of the fragrance world.
All the best for 2011!
Michael

I hadn't even tried the Idylle EDT. I'm pleased to learn I might have underestimated it. I've yet to try the Vero EDPs either. I'm itching to. Cuir I did try, and purchased. I love everything about it and am glad to see it getting some love. Happy New Year to you. Thanks for the list.

Oh Idylle I was so pleased to read it will be out in pure perfume in 2011. Happy New Year to you and your loved ones.

Can I just say I also had the pleasure of getting to know Guerlain this year too. From Eau De Guerlain, to Herba Fresca, then right off the cologne train stepping off in the orient for Shalimar. I haven't fallen this hard for a fragrance since Breath of God by Lush/Gorilla Perfume about three years ago. Sheer, heaven.

Am liking the blog of yours very much. Am going to have to give the scents listed here from 2010 a try before your list for 2011 comes out- I have some catching up to do. Which makes me happy.