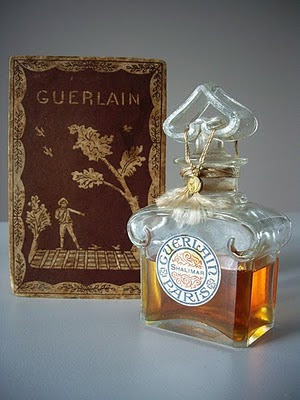 Guerlain never cease to amaze and confuse. With a rich 185 year-old history and countless perfume releases, Guerlain still manage to surprise us well into the 21st century.
Those whom have been bitten by the Guerlain 'bug' will know of this fragrance house's tendency to recycle perfume names. The 1933 release Vol de Nuit loaned its name to the 2007 perfume Vol de Nuit Evasion, just as the name of the 1933 scent Sous le Vent was later borrowed in 2009 for Teracotta Sous le Vent, despite each of these fragrances being poles apart in style and character. What one seldom sees, however, is the borrowing of a bottle: a Guerlain perfume which has been presented in a flacon reserved for another. Such things are rare and unique anomalies. 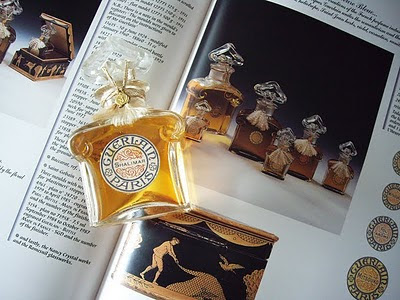 When this vintage 80ml extrait turned up recently, I had to do a double-take. Presented in the "bouchon cœur" flacon usually reserved for L'Heure Bleue, Mitsouko and Fol Arôme, this scarce Shalimar edition at first made me a little dubious. Nowhere before had I seen nor read of Shalimar ever being presented in this iconic flacon. So I turned to the professionals. In my initial contact with Mrs Christie Mayer Lefkowith - renowned perfume historian and author of a number of perfume books - Mrs Lefkowith validated this bottle as authentic. Further to this, perfume historian and author Ms Geneviève Fontan also confirmed its scarcity and authenticity. But neither made mention as to its vintage. I began to wonder at which point along the sweeping Guerlain timeline, this rare aberration might have appeared. 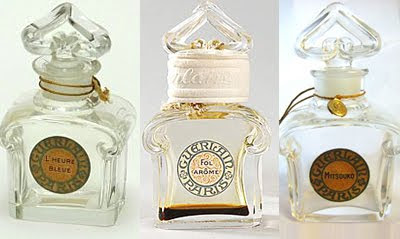 The"bouchon cœur" flacon was first designed in 1911 by Raymond Guerlain for the perfumes L'Heure Bleue (1912) and Fol Arôme (1912), and then used later when Mitsouko was created in 1919. At this point in history, glass bottles were in short supply at the end of WWI. Many basic resources were scant, which might help explain why all three perfumes were presented in this particular flacon. Whilst the "bouchon cœur" flacon was the first produced by Guerlain that reflected Art Nouveau style, it was not necessary back then to design a new bottle for every new perfume. Philippe Guerlain once said "Guerlain has created more than three hundred perfumes, but we have not found three hundred different bottles"!

Shalimar was in fact created in 1921, but was held in reserve until the Decorative Arts Exhibition in 1925, where it was presented for the first time ever in the iconic blue-stoppered fan-shaped flacon. So I wonder what might have become of it over those four long years between its origination and its commercial debut. Perhaps Shalimar was housed for a time in the only flacons immediately accessible to Guerlain: the bouchon cœur?

Or, it is quite possible that perhaps this unique presentation preceded or followed the second world war. Economic changes and the bombing of factories at that time resulted in the restricted production of the Flacon de Guerre in 1938 - a much less decorative bottle used primarily for export to house a number of Guerlain scents, including Shalimar. Meanwhile, back on their home soil could Maison Guerlain have perhaps turned to their existing repository of 'bouchon coeur' flacons as a means to move forward with production post-WWII?
I have resigned myself to the idea that I may never know the true origin of this charming perfume peculiarity. This blog piece is full of supposition, and so it remains a mystery. But really, isn't that part of the allure of the magnificent Guerlain? That there always seems to be a little folklore woven into the tapestry of its history? 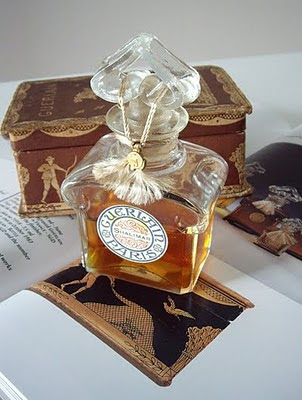 A few years back, Shalimar was presented again in the flacon "Bouchon Coeur". It was a limited edition of a 30 ml. However, this doesn't happen so often that they lend this bottle for other fragrances. At the same moment they also did put Insolence and L'Instant Magic in this bottle ( with spray 50 ml edp).

I know the edition you are speaking of Steven... the "gold tone" bouchon coeur bottle which was a 1oz EDP: the one that can be seen on the right here: http://www.punmiris.com/images/secundar/o.6740.jpg

Very Interesting. I have a small bottle of Jicky in the Flacon de Guerre edition with the box and it is half full. By the lablels still on it it looks like it was made for export to England, I bought it in Australia about 30 years ago and Jicky still smells wonderful.

Sounds wonderful David. Vintage Jicky is out of this world! And in such a desirable flacon too. :)

Yet another wonderfully informative post, Dimitri. Thanks for taking the time.
Even if I've yet to be bitten by the Guerlain bug fragrance-wise (and my wallet is thankful for it), the firm's flair for flacons is a different story: Guerlain has given perfumery some of its most iconic and beautiful bottle. The bouchon coeur flacon has always been one of my very favorites; it, and the famous 1921 / 1925 Shalimar fan flacon, have both got to be right up there in the Top 5 best bottles of all time.
Have a great weekend,
Michael

The guessing work is superbly conducted and I cherish our discussion on this rarity, which is indeed probably due to shortages of flacons, if nothing else.

It's interesting to note that the flacon bouchon coeur must have been so predominent and so plentiful (and so beautiful) that owners even kept it to decant other perfumes in it, such as what appears to be this case on Ebay. (quick, before the link expires) Not that the two cases are comparable, but it showcases well how the bottle design was very popular.

Indeed E!
I also thought the Hermes Calèche decant was unusual when I saw it. Interestingly though, did you know that in 2002 an auction held by the Fine Arts Gallery in Geneva, Switzerland offered a Hermes metal flacon for Guerlain perfumes made in 1918 which was designed to be placed in the rear pocket of hunting pants. One side of its handle is stamped HERMES, and the other GUERLAIN PARIS FRANCE. It just goes to show that a relationship did exist between the houses way back then. Of course Calèche was not created until 1961, so this ebay listing - just as you've said - is indeed proof positive that the 'bouchon coeur' flacon is loved by many.

Please Help me--- I loved Shalimar in the early 70's-
Fragrance of Shalimar is different since then- Do you know how I can id Shalimar from the 70's- and if I buy vintage will the fragrance be the same or does it change if it is older?
Please respond
jtd52@aol.com
Thank You

Just had to go take a look at the Hermes for Guerlain flacon you mentioned ( I consider Christie Mayer Lefkowith a friend and have all her books and auction catalogs)...very interesting indeed! Dana

I can find information to possibly date the bottle. I'm very interesting in this very old Shalimar presentation which perfume is my favorite and my biggest collection over 200 presentations. You could email me at spirit_of_guerlain@yahoo.fr if you have time to share informations.
Best regards. Frederic Lemaitre on Facebook also.