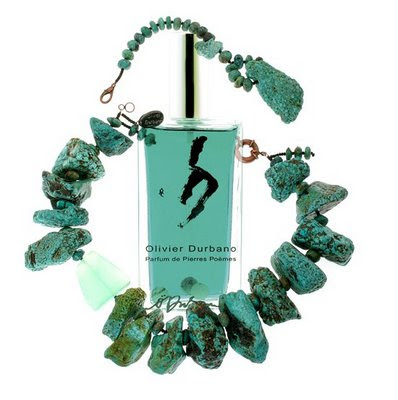 Archaeological and literary references mention Turquoise used in the jewellery worn by Queen Zar, second ruler of Egypt's First Dynasty almost 7500 years ago. It is thus no wonder it has captured the imagination of French master-jeweller and perfumer Olivier Durbano and is set to serve as the inspiration behind his fifth in a series of seven "Stone Poems".
A semi-precious jewel, turquoise has been revered in history by diverse cultures for its value both aesthetic and arcane. The Apache Indians believed this stone combines the spirits of both the sea and the sky, and the Navajo Indians regarded turquoise as a piece of the sky that has fallen to earth. Durbano's Turquoise thus fittingly resides in the ozonic family of fragrances.
I am both excited and fascinated to try this eau de parfum... turquoise has always been considered a stone full of good fortune; possessing the ability to heal, and one to wear on your body to force away evil spirits. I find Olivier Durbano's perfume talismans skilfully transmit a sense of their stone's esoteric value, just as masterfully as they echo their physical qualities.
Head notes: Turpentine, Rose Berry, Elemi, Somalian Oliban Incense, Coriander, Juniper
Heart notes: Fragrant Reed, Lotus, Fucus seaweed, Lily
Base notes: Everlasting Flower, Honey, Myrrh wood, Ambergris
Sorcery of Scent will follow up with a review of Turquoise upon its release.

Very interesting, Dimitri. Thanks. Turquoise is my birthstone. A head note is Turpentine??

Yes! an unusual accord, isn't it? Perhaps it lends itself the the ethereal ozonic quality?
Whatever the case, turquoise sounds wonderful!