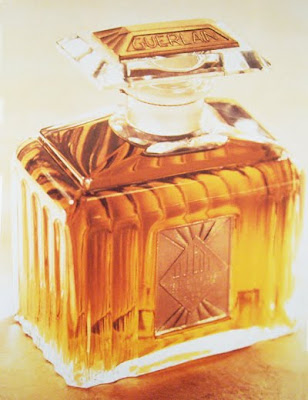 Egyptology must have been to the 1920's that which features like Harry Potter and Twilight are to us today. Howard Carter's monumental discovery of Tutankhamun's tomb in 1923 directly influenced the global psyche; much in the same way as teenage vampires have penetrated our cultural consciousness in 2010. But whilst we in the here and now must suffer the commerce surrounding pasty-skinned blood-suckers and battling werewolves, our great-grandparents actually drew breath during an age of colossal cultural, anthropological and historical value. Oh, how I envy them! 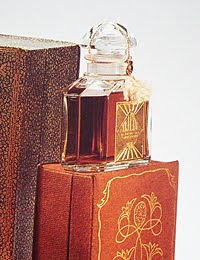 The magic and mystique of ancient Egyptian dynasties certainly served as the inspiration behind Guerlain's Djedi: a captivating and rare chypre oriental perfume created in 1926, just three years after Carter's significant find. Djedi was presented in a flacon designed the sculptor Georges Chevalier and produced by Baccarat in 60ml, 125ml and 250ml sizes. The contours of the bottle (with its tall, ridged sides and gently tapering rectangular ground glass stopper) is distinctly Art Deco in style; but also suggests the form of a golden sarcophagus with its lid being raised.
Djedi was marketed in this flacon until the end of the 1950's, and also for a short time in an exceedingly rare quadrilobe presentation. It was re-issued in 1996 in celebration if its 70th year as a limited run of 1000 numbered Baccarat bottles created from the original 1920's 60ml mould.

Before I go on to review this scent, first a little background: the name Djedi is derived from references found in the ancient Egyptian Book of the Dead where the Djed is described as a pillar which was raised to maintain universal stability, balance and continuity. It is the invisible cosmic axis or "world tree" around which everything revolves... it separates the earth from the sky; and matter from spirit. The Djedi are the ancients attributed to spreading this awareness... often referred to or portrayed as formidable primeval magicians. Djedi are mentioned in historical tales of Egypt as possessing tremendous mystical powers; their shamanistic practices, still an enigma.
I feel this information important to mention as it translates directly to the perfume itself. Until Djedi's launch in 1926, Guerlain have perhaps never before nor ever since created a perfume which so precisely and faithfully depicts an age of esoteric antiquity.

Djedi the perfume is less luminous than other Guerlain offerings. It serves as a period piece honouring the ancient past... perhaps a past as archaic as the pyramids themselves. Whilst a very complex perfume, Djedi is somehow as basic and primordial as dirt and stone - the basic building blocks of man. It is earthy, elemental and possesses a certain olfactory temperature - a feeling of dwindling warmth like that thrown out by the dying embers of a bonfire. It darts back and forth across the invisible boundary of light where amber warmth meets the cold black of night. Djedi isn't 'pretty' like her sisters; instead, she perhaps represents the disfigured sibling who spends her life residing in the gloom. Something is "off". Sinister. Agonizing.


Djedi is composed using a very dry vetiver: one that furnishes the perfume with a parched, arid vibe. Combined with a measure of civet, patchouli, oakmoss and musk, this vetiver lends a dank, musty quality that evokes sensations of being deep underground; where narrow stone corridors trap the air that has not shifted over the millennia. There is a sense of being unable to catch ones breath. A commanding leather facet also brings with it a feeling of antiquity - I immediately imagine dusty animal skins stitched together to fashion a tattered ceremonial shroud. I feel as if I am witnessing the ghosts assemble at an ancient entombment; the atmosphere palpable with a sense of grief, sorrow and despair.


My nose struggles to reach for the rose and jasmine said to reside at the heart of Djedi, but Im sure they are there. Perhaps, as this olfactory requiem unfolds, my senses too have become impervious to the beauty that surrounds us all during a time of lamentation. Whilst I cannot pinpoint these individual notes, I do recognise what this resolute floral facet brings to the fabric of this perfume, and that is a contemplative moment to look back on an age of immeasurable glory and resplendence. I suspect it was Jacques Guerlain's wish to create Djedi so the world could recognise the rise and fall of one of the world's most powerful and beautiful ancient empires.

Djedi - being one of the rarest and most difficult to source of all Guerlain fragrances - threatens to be lost again to the sands of time. One might hope that the Djed is raised again, linking the material world with the esoteric one, and our prayers of resurrection are answered.

It sounds gorgeous to me. I prefer dark to all the light Aqua Allegorias, and my dislike of bergamot spoils most of the Gerlain classics for me. This sounds more my style. I hope they revive it too.

PLEASE send your fine article to Guerlain!!! MAYBE they will take the hint??

Actually, I believe the name of the perfume is more precisely linked with the ancient tale of King Cheops (Khufu) and the magicians, as told in the Westcar papyrus. "Djedi" was the name of the most powerful magician in this tale (and his name was indeed linked with the djed pillar and the general idea of stability - "djedi" could mean "the stable one" or "he of the djed-pillar").

Indeed!
Reading on the topic is exhaustive, and the historic records of the names Djed and Djedi are numerous.
Thank you for stopping by Six'!

You're welcome! I'm a long-time reader, but I believe it was the first time I commented here! And I apologize for the tone of my comment - it was late and I realize just now it did sound dryish... I didn't mean it as a slap on your fingers, of course!

Please don't apologise Six'... all the information is valuable to readers who don't know the full history. Im delighted you decided to comment :)
D.

Very nice review! I'm about to order a sample and really hope that "Djedi" is as good as your review! ;-)